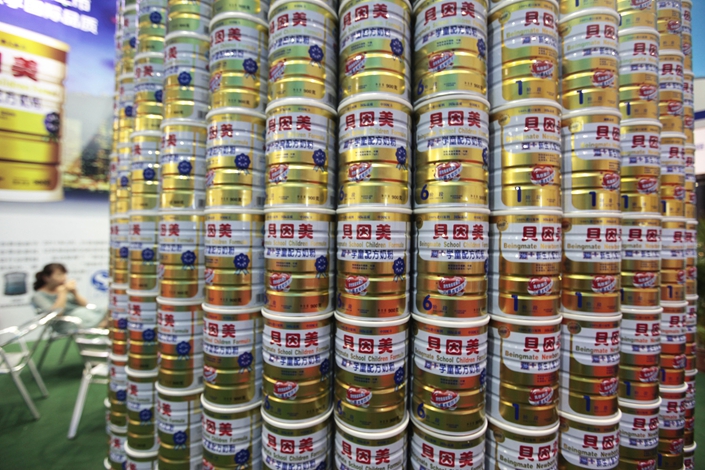 The sale marks the end of a relationship that started out with big promise but later soured over managerial differences. Photo: VCG

New Zealand dairy giant Fonterra said on Wednesday it will start to sell down its stake in longtime China partner Beingmate, once one of China’s most promising peers in the sector, in the final stages of a divorce between the pair over management differences.

Fonterra Co-operative Group Ltd. said it tried to find a buyer for its 18.8% of Shenzhen-listed Beingmate Baby & Child Food Co. Ltd., but those efforts failed. Therefore, it decided to begin selling down the stake in the open market and through smaller private placements in accordance with Shenzhen Stock Exchange rules, according to its announcement of the plan.

Following the slow unwinding of its relationship with Beingmate through previous moves, Fonterra said it now considers the 18.8% holding, which makes it Beingmate’s second largest stakeholder, as a “financial investment only.”

“From here, it’s about making pragmatic decisions to get the best outcome for the Co-op from our holding in Beingmate,” said Chief Executive Miles Hurrell. “China will always be one of our most important markets. We’ve got a strong business there and are still very much focused on the areas in China where we can succeed.”

The sale would mark the end of a relationship that started out with big promise but later soured over managerial differences.

Read more
In Depth: Is China’s Former Baby Formula Leader Back From the Brink?

Founded in 1999 by child care expert Sam Xie, Beingmate went public in 2011 and was the sector’s leader in 2013, when it made a net profit of 721 million yuan ($102 million). The company tied up with Fonterra in 2015 when the New Zealand giant bought its 18.8% stake for 3.46 billion yuan, representing a 34% premium over the company’s market value at that time. At its current price of 5.11 yuan, the stock now trades at less than a third of the 18 yuan per share that Fonterra paid.

Just a year after the tie-up, trust in Beingmate’s products was dented when it was discovered that a counterfeiting ring was selling cheap — but safe — infant formula in the branded containers of well-known brands including Beingmate. The company denied any involvement.

More recently Beingmate’s finances began to suffer, and its stock was given the “special treatment” tag by the Shenzhen bourse in April 2018, which meant it was considered to be at risk of delisting. Stocks get such a tag if they suffer two straight years of losses, have unusual financial conditions or have been fined for regulatory violations. Last month the company said in a stock exchange announcement it expects to post a net loss of 110 million yuan to 150 million yuan for the first half of this year.

Market watchers said that despite being a public company, Beingmate was being run like a family business, with many of Xie’s relatives — including his wife, nieces and uncles — holding key positions. The two sides also clashed over management, including Xie’s role and his decision to bring in state-owned Great Wall Asset Management Co. Ltd. as a financial backer last December.

Fonterra said it has already wound up most of its other investments with Beingmate following an earlier review of the partnership. It said that included bringing its Anmum brand in China “back in-house under our management,” and ending its joint venture with the Chinese company in the Australian town of Darnum.