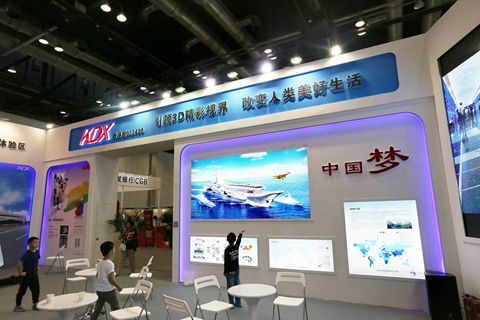 Kangde Xin was found to have overstated its profits for the four years through 2018 by a total of 11.9 billion yuan. Photo: VCG

Scandal-plagued Kangde Xin Composite Material Group Co. Ltd. was barred from debt financing after the Shenzhen-listed laminating film manufacturer was found to be involved in a massive fraud.

The National Association of Financial Market Institutional Investors (NAFMII), a bond market regulator, announced the penalty on Kangde Xin and its parent, Kangde Group, Tuesday and required them to rectify their operations. NAFMII banned the companies from using debt instruments for fundraising taking, effective July 31, without giving a resumption schedule.

A person close to the regulator said it is very likely Kangde Xin and Kangde Group will be barred from selling bonds on the interbank bond market indefinitely.

Kangde Xin and its parent have long falsified financial information and made false disclosures on their debt financing activities, posing great risks to investors and causing severe impacts on the financing environment for private companies, NAFMII said Tuesday.

Kangde Xin rattled China’s bond market with several bond defaults this year even though its financial statements showed it had 15 billion yuan in cash and bank deposits late last year. On Feb. 15, Kangde Xin missed a 55 million yuan ($8.2 million) interest payment on a 1 billion yuan five-year note after defaulting on two short-term debt instruments totaling 1.5 billion yuan in January. In March, the company failed to pay $9 million of interest on a $300 million bond.

The top securities regulator opened an investigation into Kangde Xin and found the company overstated profits for the four years through 2018 by a total of 11.9 billion yuan, according to a statement of the China Securities Regulatory Commission in July.

The CSRC also found the parent company had embezzled as much as 53.1 billion yuan in Kangde Xin’s funds from 2014 to 2018 through its accounts at Bank of Beijing Co. Ltd.

Earlier in May, Kangde Xin’s former chairman and controlling shareholder Zhong Yu was put under “criminal coercive measures” by police in the eastern city of Zhangjiagang, where Kangde Xin is based.

Based on market records, Caixin calculated that Kangde Xin raised more than 8.8 billion yuan since 2014 through bond sales and private placements. Its bond underwriters include major banks such as Bank of Beijing, Bank of China, China Construction Bank and the Industrial and Commercial Bank of China.

Kangde Xin’s auditor, Ruihua Certified Public Accountants, has been placed under investigation for failing to perform its duties, the CSRC said last month.