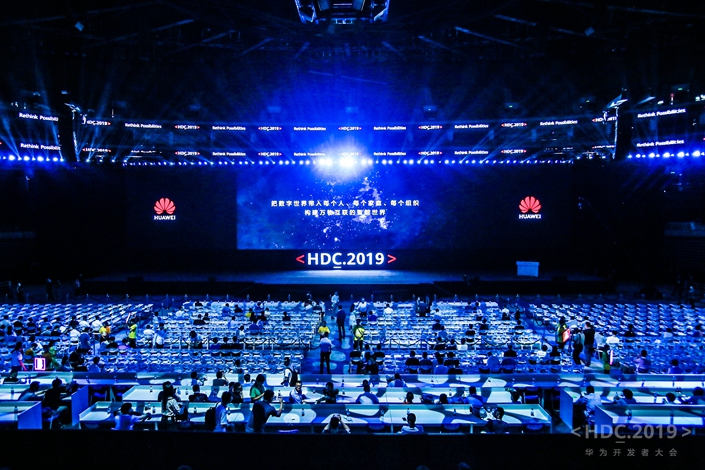 Huawei officially unveiled a self-developed open-source operating system (OS) on Friday, a major development in the embattled telecom giant’s effort to disentangle itself from the Google-made software it fears could get snarled up in U.S.-China trade tensions.

The operating system, called HarmonyOS, or Hongmeng in Chinese, is a microkernel-based, distributed OS that can be used on smartphones, wearable devices, laptops, and other devices, the company said at its annual developer conference in the southern city of Dongguan, where the company has a key manufacturing site.

The 1.0 version released Friday will be used in Huawei’s TV products slated for launch later this year, while a more updated 2.0 version, set for a 2020 release, will be installed in its domestically made smart devices including personal computers, watches, bracelets, and head units in cars, according to the company.

HarmonyOS will be a “global operating system” using open-source technology “to allow developers around the world to participate in building a leading operating system for the next generation,” said Richard Yu Chengdong, CEO of Huawei’s Consumer Business Group, at the conference.

HarmonyOS’s simplified microkernel — the near-minimum amount of software needed to run the platform — makes it more capable of withstanding attacks compared with similar OSs, Huawei said in a press release. Furthermore, HarmonyOS will be the first OS boasting a verified so-called trusted execution environment, which improves connected security across multiple devices and scenarios, the statement added.

Currently, Huawei’s smartphone models still use the Google-developed Android OS as well as its associated ecosystem. However, Huawei will be able to turn to HarmonyOS at any point in the future if Android becomes unavailable, Yu said.

That’s important because Huawei has long feared that ongoing trade tensions between the United States and China could result in American systems being withdrawn from Huawei’s products. The U.S. government has already sanctioned Huawei and several of its subsidiaries by adding them to its so-called Entity List, restricting their ability to do business with American suppliers.

Huawei is known to have been building a proprietary OS for several years. In March, Yu confirmed to German newspaper Die Welt that the company had developed its own OS. However, a Huawei spokesperson later told the South China Morning Post that the software was only to be used in “extenuating circumstances.”