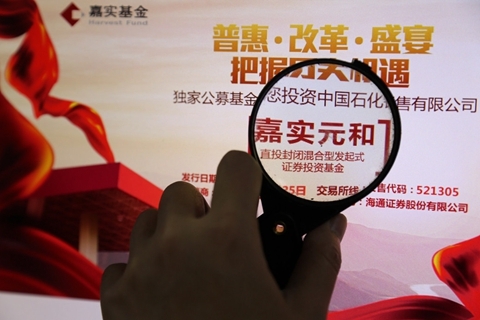 China’s first mutual fund dedicated to investing in nonlisted companies announced Tuesday a plan to liquidate after its five-year operation period ends and as its biggest investment, Sinopec Marketing Co., prepares for an initial public offering.

The fund’s Sinopec holding has gained about 26% to a valuation of 6.29 billion yuan as of the end of June, according to the fund’s second-quarter report. The fund’s returns failed to beat the benchmark of peer funds, based on the five-year bank deposit rate plus 2%.

Because the price of Sinopec Marketing’s equity has not been made public, investors’ final return from the fund can’t be determined. Neither Harvest nor Sinopec has disclosed buyers or prices for the stake.

Sinopec won approval from China’s cabinet for a long-awaited IPO of the retail unit earlier this year. It aims to sell shares of the business in Hong Kong this year, though it hasn’t set a definitive timetable, Bloomberg reported in January, citing people with knowledge of the matter.

Sinopec said in March that the mixed ownership reform at the retail unit was basically completed and the next step would be an IPO at the appropriate time. The company said it was actively preparing for the listing but needed approval from relevant regulators for the timing in addition to considering market conditions.

In February 2014, Sinopec Marketing invited 25 institutional investors and asset managers to take part in a capital injection of more than 100 billion yuan. Building on investors’ high hopes for China’s SOE mixed-ownership reform, the Harvest fund sold out within one day on Sept. 23, 2014, making it one of the hottest mutual funds at the time. The fund was listed on the Shanghai Stock Exchange on March 16, 2015.

“This is the first time that publicly traded mutual funds have injected capital directly into the real economy in the form of equity investment, marking a major icebreaker,” Harvest Fund Chairman Zhao Xuejun said at the time.

According to its contract, the fund will expire in September. If the fund reasonably believes the Sinopec Marketing IPO won’t take place before the expiration date, the fund can transfer its Sinopec Marketing equity to other “carefully selected qualified investors.”