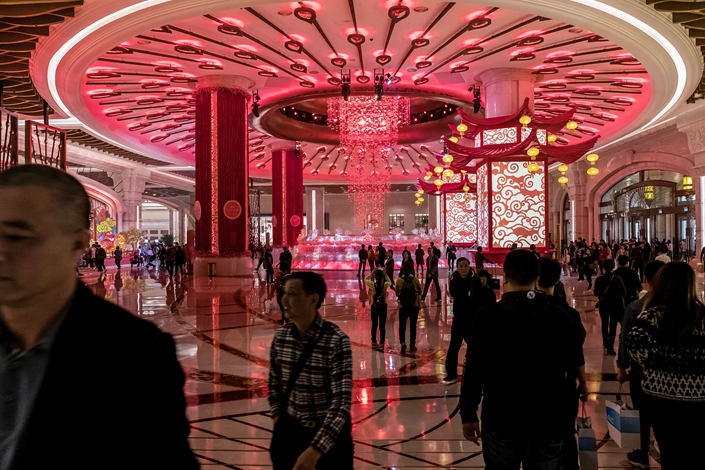 Galaxy Entertainment Group Ltd., one Macau’s biggest casino operators, reported its profit dropped 7% in the first half of the year as the world’s richest gambling hub continues its efforts at a recovery after a national crackdown on corruption scared away high-rollers.

The company posted profits of HK$6.7 billion ($850 million) in the first six months on revenue of HK$26.2 billion, according to the group’s financial report filed to the Hong Kong Stock Exchange on Tuesday.

Galaxy’s gross gambling revenue, including from its affiliate City Clubs, was $30.6 billion, down 11% year-on-year, dragged by a plunge in its business catering to the wealthy. The group’s total takings from these kinds of gamblers tumbled 25% to $14.8 billion, while the revenue of its mass market segment — which is mostly made up of casual gamblers and families — rose 8% to $14.6 billion, according to the financial report.

The company’s performance is in line with the overall market in Macau, which saw gross gambling revenue fall 0.5% in the first half of this year, according to data released by the local government.

Spending by high-rollers in the special administrative region dropped 14.5% in the first six months, while mass market revenue rose 17.3%, according to a report released by Hong Kong-based brokerage Guotai Junan Securities Co. Ltd.

Macau’s gambling sector has had to reorient itself toward the mass market ever since the corruption campaign — which kicked off after the 18th National Congress of the Communist Party in 2012 — brought capital restrictions and other measures to combat corruption.

Though trade tensions might dampen spending, the opening of the Hong Kong-Zhuhai-Macau Bridge — which connects the two special administrative regions and Guangdong province — and the continuous growth in mainland affluence, will boost Macau’s development, said Galaxy Entertainment Chairman Lui Che-woo. Lui is the city’s third-richest man with a fortune of 19 billion yuan ($2.7 billion) in 2018, according to Forbes.

Galaxy is one of Macau’s six casino license holders and runs three casinos in the city, including Galaxy Macau, Broadway Macau and StarWorld Macau.