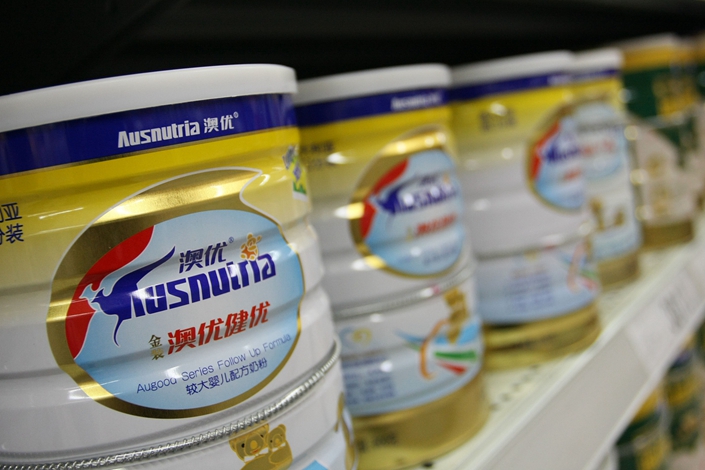 Ausnutria “denies all the allegations contained in the report and considers such allegations completely unfounded and gravely misleading.” Photo: VCG

Shares of Ausnutria Dairy Corp Ltd. closed up 13.9% on Friday after the Chinese infant milk formula-maker struck back at a U.S. short-seller, claiming accusations it had inflated its revenue were baseless.

The Hong Kong-listed company was the subject of a 42-page report released by Blue Orca Capital LLC on Thursday accused the milk-powder producer of making up 52% of its infant milk formula revenue in China for the two-year period between 2016 and 2017. The report claimed that the company “hides costs, misleads Chinese consumers and secretly enriches executives through undisclosed related party transactions.”

After the report went out, shares of Ausnutria plunged by 20%, forcing the company to suspend trading for the day. Trading resumed on Friday morning after the company filed a clarification announcement.

Citing a third-party data firm, Blue Orca said customs data indicated the dairy company inflated the amount it had imported. Ausnutria — which imported all of its infant formula sold in China from overseas suppliers and its own subsidiaries — was found to sell much less in China than it reported during the two-year period, after deducting its inventory increase, the report said.

Ausnutria responded that the customs data source was not reliable, and the estimation was based on the group’s inventory level worldwide, instead of its inventory volume in China. The company also said the estimate didn’t take into consideration the company’s imports from local subsidiaries of overseas suppliers.

Ausnutria said in the filing that the board of the company “denies all the allegations contained in the report and considers such allegations completely unfounded and gravely misleading.”

The accusations came two days after Ausnutria released its interim results on Tuesday. The dairy-maker posted a profit of 434.9 million yuan in the first half of this year, an increase of 63.8% year-on-year, on revenue of 3.1 billion yuan.

Based in the interior Chinese city of Changsha, the company earned about 88% of its revenue from Chinese market in the first six months of this year, with the rest coming from regions across the globe including Europe, America and Australia.