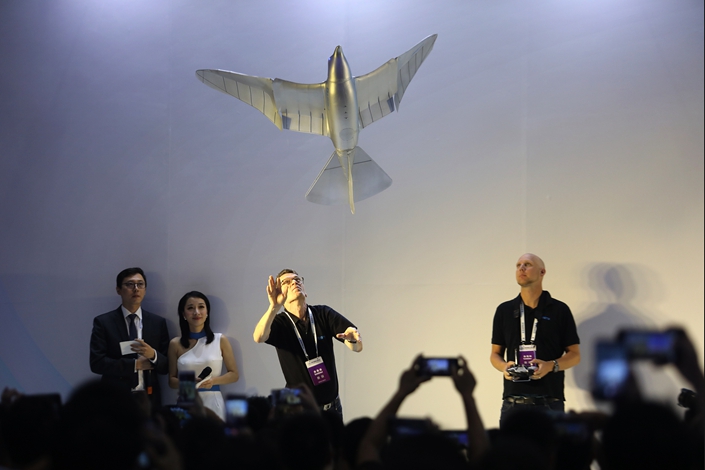 A company displays a birdlike robot at the World Robot Conference in Beijing on Aug. 20. Photo: VCG

China’s industrial robotics market contracted for the first time as industry consolidation continues, a government official said at an industry conference in Beijing.

The market shrank 3.75% in 2018, breaking a growth streak of five consecutive years, said Xin Guobin, vice minister of the Ministry of Industry and Information Technology. The contraction in China also took a toll on the global market for industrial robotics, causing growth to slow to about 1%.

From 2013 to 2017, China had been the fastest growing market for industrial robotics, even as the global market grew at a double-digit growth rate during the five-year period, Xin said in his remarks Wednesday at 2019 World Robot Conference.

The market downturn was primarily the result of sluggish growth in downstream industries such as automotive and electronics, where robots have been in heavy use, Xin said. A deteriorating international trade environment and a slowing economy worldwide haven’t helped either.

For example, the auto sector has always been a major user of industrial robotics, but in 2018, the segment accounted for 23.76% of the market, far lower than 45% previously.

More and more robots have been used, not only in industry but also services. Yet the markets for both industrial robots and next-generation robots went through big changes and turmoil in 2018, said Qu Daokui, founder and chairman of Siasun Robot & Automation Co. Ltd., a ChiNext-listed robotics company based in Shenyang, Northeast China’s Liaoning province. Many companies shut down, founders disappeared, and agreements with investors went unmet, Qu said.

Qu believes that the past year marked a turning point for China’s robotics industry. After years of rapid growth, the robotics industry will undergo a period of consolidation as it seeks to shift its focus from the pursuit of growth to the pursuit of quality. China’s market has experienced unbridled growth, with thousands of companies born in just a few years, but moving forward, the industry’s growth will be a lot more rational, Qu said.

In the next stage, exploring new applications and improving quality and efficacy will be the industry’s most urgent needs, Xin said. To achieve those goals, the industry will have to merge robotics with emerging technologies such as artificial intelligence, 5G and the industrial internet, he said.

“Generally speaking, the robotics industry is now in a stage of exploration. There are more unknowns than knowns, and more risks as well in this field,” Xin said, adding that the industry should also focus on security risks and ethics issues as it moves forward.