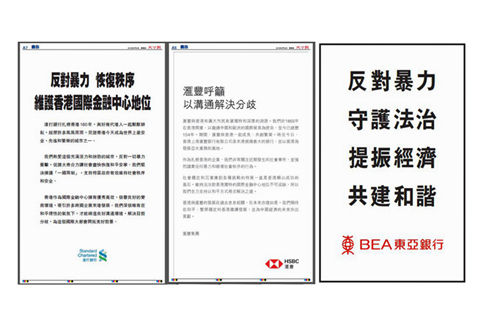 Two British banks and a Hong Kong local bank spoke up through newspaper ads, condemning the violence in the city and calling for a peaceful resolution.

HSBC is the biggest bank in terms of assets in Hong Kong, and Standard Chartered is the fourth-largest bank. Both are authorized as note-issuing banks in Hong Kong.

Bank of China (Hong Kong), the third of the note issuers, and other mainland companies operating in Hong Kong published similar newspaper ads earlier in August.

“As a company rooted in Hong Kong, we are very concerned about the recent social events and strongly condemn any violence and actions that disrupt social order,” HSBC bank said in an advertisement in Chinese.

Hong Kong’s rule of law is indispensable for the city to maintain its status as an international financial hub, HSBC said.

Standard Chartered said in its ads that it condemns any violence and calls on the public to work together to restore peace as soon as possible.

The three banks joined a chorus of Hong Kong’s businesses calling for an end to the worst riots in the city’s history. What began as peaceful mass protests in early June against a controversial extradition law have evolved into street violence and confrontation with the police that have lasted nearly three months.

On Aug. 16, Li Ka-shing, the city’s wealthiest businessman, ran full-page ads on the front pages of major Hong Kong newspapers calling for an end to violence. The 91-year-old retired tycoon signed the ads “by a Hong Kong citizen, Li Ka-shing.”

London-based Swire Group, the parent of Hong Kong’s flagship air carrier Cathay Pacific Airways, was the first foreign company to run such anti-violence newspaper ads. On a half-page ad published Aug. 14, Swire condemned any illegal and violent actions that challenge the principle of “One Country, Two Systems” and the authority of Hong Kong’s Basic Law.

Cathay Pacific Airways also posted similar ads on the same day after the carrier became embroiled in a controversy related to the protests.

Cathay Pacific CEO Rupert Hogg and Chief Customer and Commercial Officer Paul Loo resigned Aug. 16 “to take responsibility as a leader of the company in view of recent events,” following Beijing’s warning to the carrier over participation by some employees in the protests.