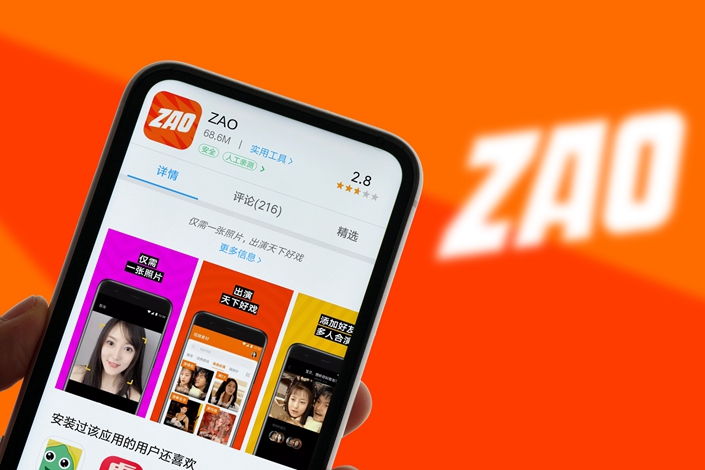 An app that allows users to insert their faces into scenes from movies and TV has sparked concerns over privacy, amid the growing use of facial recognition technology in China.

Within 24 hours of its release on Friday, Zao — created by the Chinese developer of dating app Momo — had climbed to the top of Apple app store’s free download chart and was widely discussed on social media.

Zao users can upload a selfie, which is then inserted into a clip from a movie or TV show of their choice, or into a video they upload themselves. This kind of fabricated video, which is powered by machine-learning techniques, is commonly referred to as a “deepfake.”

However, privacy concerns emerged as it gained traction, with reporters and commentators pointing out the potential risk to users’ data. One was a clause in Zao’s user agreement that said the app has the right to use any image or video created on the platform for free, globally.

The app responded Sunday, saying in a post to Weibo that it “is fully aware of the privacy concerns that have been raised and will improve functions that were previously ill-considered.”

The app has since amended its user agreement. It now says users’ data won’t be used for other purposes and will be protected according to related laws and regulations.

Despite this change, links to the videos generated by Zao were not accessible on WeChat — China’s most popular social media platform — from Sunday night. Clicking on the links returned a message reading “the page has been blocked due to security concerns.”

Alipay, China’s most popular mobile payment platform, was quick to dismiss concerns that apps like Zao might pose a threat to its facial-recognition scan payment system. It said in a statement that “images created through face-swapping apps – no matter how realistic they are – cannot penetrate our system.”