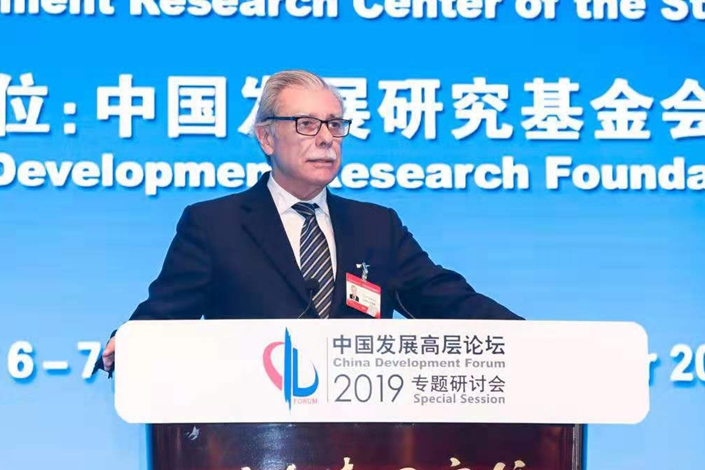 A former U.S. commerce secretary warned Friday that tensions including a prolonged trade war between the U.S. and China has caused a “precipitous drop” in world trade and investment flow, calling on global leadership to restore confidence and promote institutional reform as an effort to reverse the trend.

Speaking at a China Development Forum event on the U.S.-China trade war in Beijing, Carlos Gutierrez, U.S. secretary of commerce from 2005 to 2009, said growth in the global goods trade, as estimated by the World Trade Organization, would — “not surprisingly” — continue to fall to 2.6% this year. “And I suspect that estimate will be revised downward,” he said.

Furthermore, global foreign direct investment is also at risk of falling further as “trade and investment are closely linked,” he said. “So concerns about U.S.-China trade tensions, and other trade restrictions, are causing a precipitous drop in investor confidence globally.”

Gutierrez’s comment came as the U.S. and China agreed to resume their stalled trade talks in early October after a phone call on Wednesday night between Chinese Vice Premier Liu He, and U.S. Trade Representative Robert Lighthizer and U.S. Treasury Secretary Steven Mnuchin.

On Tuesday, Beijing responded to U.S. President Donald Trump’s latest round of punitive tariffs, which took effect on Sept. 1, by filing a lawsuit with the WTO.

The former commerce secretary added that all of the recent talk of a “decoupling” between the two largest economies is unrealistic. “U.S. and Chinese business and expert communities know that this so-called cure will be worse than the disease,” he said.

“We rely on each other so much,” he told Caixin on the sidelines of the forum while talking about bilateral trade and investment.

Gutierrez said the leaders of the two countries are required to make “hard choices” and hard compromises to find pragmatic solutions. “Reaching a trade agreement may just be the beginning of the process to restoring trust,” he said.

One of China’s former vice foreign ministers, Fu Ying, echoed this sentiment, saying that China and the U.S. should make an effort to reverse the current deterioration of bilateral ties. “If China and the U.S. could find a new path of engagement ... we would be able to achieve some sort of ‘coopetiton’ (cooperation and competition at the same time), maintaining necessary rights of development in equal status,” she said during a panel discussion after Gutierrez’s remarks.

Speaking at the same panel discussion, Susan Thornton, former U.S. assistant secretary for East Asia affairs at the State Department, agreed that the world’s two largest economies should maintain a “stable and cooperative” relationship in the transition from a U.S.-dominated global system to a new one.

Thornton, now a senior fellow at the Paul Tsai China Center at Yale University, insisted that the U.S. would not pose a threat to China’s survival and vice versa. “China and the U.S. can and should co-exist in the international system,” she said.

In early July, Thornton co-authored an open letter with 100 U.S. academics, published by The Washington Post, appealing to U.S. President Donald Trump and members of Congress to restore U.S.-China ties. “We are deeply concerned about the growing deterioration in U.S. relations with China, which we believe does not serve American or global interests,” the letter said.

“Although we are very troubled by Beijing’s recent behavior, which requires a strong response, we also believe that many US actions are contributing directly to the downward spiral in relations,” it said.