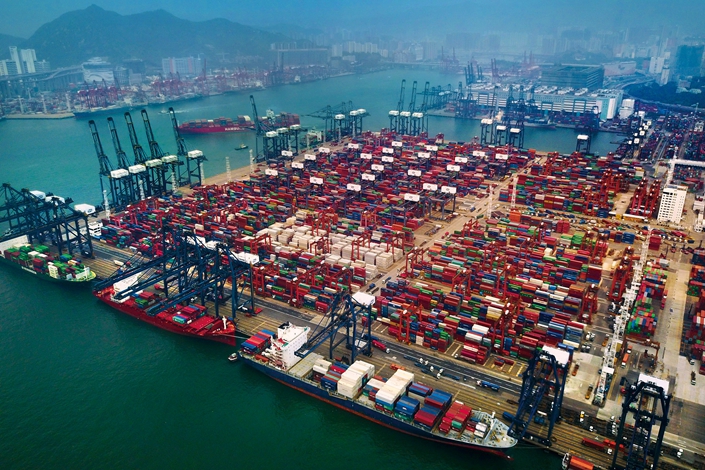 (Bloomberg) — Hutchison Port Holdings Trust will be removed from Singapore’s Straits Times Index after a dramatic fall in its market value amid rising global trade tensions, the index provider said in a statement.

The move marks the end of an era for the Li Ka-shing backed container port trust in Hong Kong, whose initial public offering in 2011 was among the biggest that year. The market capitalization has dropped 84% since the IPO to around $1.4 billion, the lowest among the 30 constituents of the Straits Times Index, according to data compiled by Bloomberg. The decline was accompanied by falling operating income since 2016 due to weakened trade demand.

Hong Kong, once the world’s busiest container port, has lost volumes to its neighbors in the last two decades and slipped in global rankings to seventh place last year, falling behind Shanghai, Singapore, Ningbo, Shenzhen, Guangzhou and Busan. The city has been handling fewer boxes every month since October 2017. A prolonged Sino-America trade war and one of the worst protests in Hong Kong since the 1997 handover mean the situation could worsen.

Shares in the container port trust fell as much as 1.3% as of 12:38 p.m. in Singapore on Friday, extending their decline this year to 37%. That compares to a 2.9% gain for the Straits Times Index.

OCBC analyst Chu Peng — who expected the removal of the stock from the index — has reduced his price target on the shares to $0.17 from $0.22 while keeping a hold rating given that U.S.-China trade war will result in high volatility in the share price. The stock currently has zero buy, four hold and two sell ratings, according to data compiled by Bloomberg.

Aside from the removal of Hutchison Port, Mapletree Commercial Trust will be added to Straits Times Index following a quarterly review in September, FTSE Russell said in a statement on Thursday. The next review will be in December.

Removal from the gauge “could result in further selling pressure as HPHT is increasingly being viewed as a proxy to the U.S.-China trade tensions,” he said.