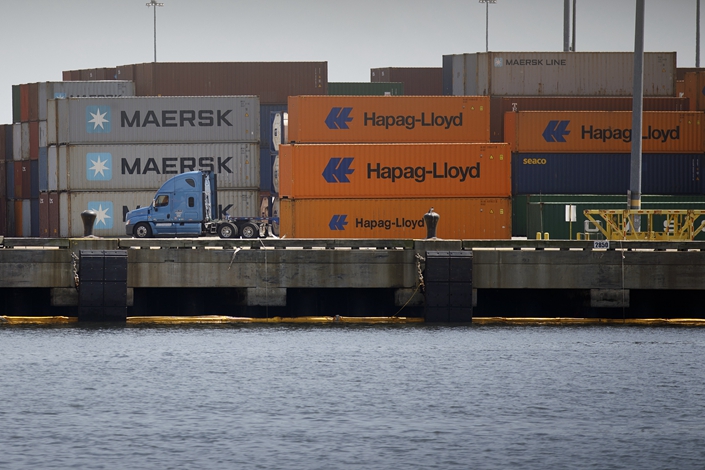 Stacks of shipping containers sit along the dock at the New York Container Terminal in Staten Island. Photo: VCG

The impact of the Sino-U.S. tariff war on China hasn’t been as significant as expected so far, but that doesn’t mean the impact of continuous escalation of the trade war can be ignored.

Given that the impact of additional tariffs on $300 billion yuan of Chinese exports to the U.S. has yet to show itself, and that Chinese re-exports to the U.S. through member countries of the Association of Southeast Asian Nations (ASEAN) are likely to face more regulatory pressure, the adverse impact of the ongoing trade war will become more obvious in the future.

Compared with multiple trade wars in the past, the current one has caused a less dramatic loss than expected for China’s export sector.

Tariff hikes have different impacts on the U.S. and China. Changes in U.S. imports tend to directly reflect the impact of the tariffs. Yet some Chinese importers have actively reduced, or even cut all, imports from the U.S.

On the contrary, U.S. exports to China showed a different picture, declining across the board no matter whether they are subject to additional tariffs. In June, $50 billion and $60 billion of U.S. exports to China, as well as those that hadn’t been subject to tariff hikes, declined 53%, 36% and 25% year-on-year, respectively. This suggests that Chinese importers, especially state-owned enterprises, have slashed their imports from the U.S. amid the tariff war.

Although, so far, the impact of tariff hikes on China’s export sector hasn’t been that significant, in the long run, continuing escalation of the trade war will impact China’s appeal to foreign investment and industrial chain transfer. The trade war has already had an impact on bilateral investment. Since last year, the combined value of foreign direct investment between China and the U.S. has declined sharply. In 2018, China’s direct investment in the U.S. dipped to $5.4 billion, roughly equivalent to the level in 2011 and more than 88% down from the 2016 peak of $46.5 billion.

Seeking to win re-election and to reach a trade deal with China are in line with U.S. President Donald Trump’s political goals. And preventing trade friction from spreading to other fields and avoiding a financial war are in line with China’s need for stable economic development. So it’s still necessary to strive for trade friction to be limited to a certain scope, to promote negotiation, and to prevent the two countries from going into a more unpredictable direction.