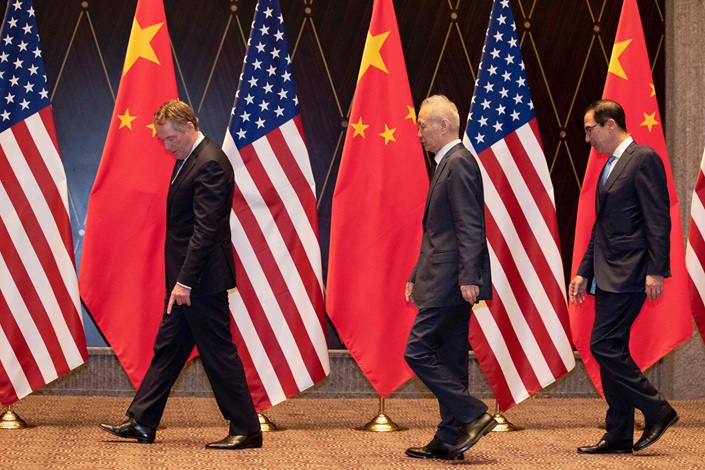 US Trade Representative Robert Lighthizer (left) leads Chinese Vice Premier Liu He (center) and U.S. Treasury Secretary Steven Mnuchin to their positions for a group photo during a meeting in Shanghai on July 31. Photo: VCG

China and the U.S. agreed to hold another round of trade talks in Washington in early October, China’s Ministry of Commerce announced Thursday.

China’s Vice Premier and top trade negotiator Liu He spoke with U.S. Trade Representative Robert Lighthizer and Treasury Secretary Steven Mnuchin by phone on Thursday morning and agreed to begin preparing for the October meeting in mid-September, according to a press release (link in Chinese) from the commerce ministry.

China and the U.S. will try to achieve “substantial progress” at the October talks, Ministry of Commerce spokesperson Gao Feng said at a briefing on Thursday. But China will not withdraw the complaint it filed to the World Trade Organization (WTO) about the U.S.’s additional tariffs on Chinese products, he said.

China’s complaint concerns additional 15% tariffs imposed by the U.S. on the first batch of $300 billion worth of Chinese products on Sunday, the commerce ministry said (link in Chinese) in a statement Monday. The final batch is scheduled to take effect in mid-December.

“The escalation in the past couple of days suggests more escalation is likely underway. The chance for US and China to strike any deal is getting increasingly smaller,” economists with Nomura International (Hong Kong) Ltd. said in a note last Monday. “We maintain our view that more likely than not the US will eventually impose additional 25% tariffs on the remaining US$300bn list of Chinese imports.”

The U.S. has also pledged to further increase tariffs on another $250 billion worth of Chinese goods to 30% from 25% starting from Oct. 1.

China announced last month that it would impose additional 5% or 10% tariffs on $75 billion worth of American goods. Some of the new tariffs took effect on Sunday, with the rest on Dec. 15.

The Nomura economists expect Beijing to ramp up policy easing and stimulus measures to stabilize growth.