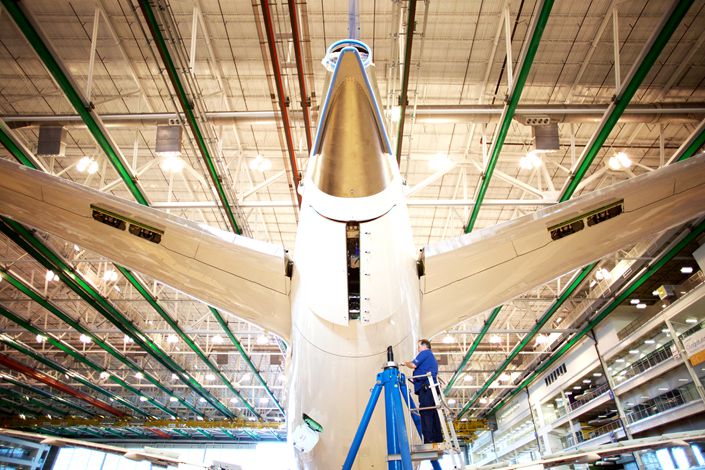 An employee works on the tail of a Boeing Co. Dreamliner 787 plane on the production line at the company's final assembly facility in North Charleston, South Carolina, U.S., on Tuesday, Dec. 6, 2016. Photo: Bloomberg

(Bloomberg) — The Boeing Co. 787 Dreamliners once praised as “beautiful” by U.S. President Donald Trump could become a casualty of his escalating trade war with China.

The sparring between the two economic superpowers has injected new uncertainty into Boeing’s wide-body production and deliveries, particularly for jets like the 787 Dreamliner and the larger 777 that are popular with Chinese airlines, said Dennis Muilenburg, the plane-maker’s chief executive officer.

“We’re still hopeful that a trade deal will be accomplished and that airplanes will be part of that,” Muilenburg said Wednesday at a Morgan Stanley conference. “But a lack of a trade deal does add risk to our wide-body skyline. So we’re paying close attention.”

The carbon-fiber Dreamliner, Boeing’s most-advanced jetliner, is a critical source of cash as the manufacturer works with regulators to lift a grounding of the highly profitable 737 Max. But analysts wonder how long the Chicago-based company will be able to keep making 14 Dreamliners a month — a record pace for twin-aisle jets — as the 787’s order backlog dwindles amid waning wide-body demand.

Boeing still has a few unfilled delivery slots for the 787 over the next two years and more openings in 2022, Jefferies analyst Sheila Kahyaoglu said in a Sept. 10 report. “Without an acceleration in order activity, we estimate rate could be cut in 2022 with a potential announcement in late 2020/early 2021,” she wrote.

Muilenburg acknowledged that maintaining the current Dreamliner pace is “a risk area for us,” since Chinese orders figured into Boeing’s sales forecasts. About 17% of Dreamliner deliveries to date have gone to the People’s Republic, Kahyaoglu said.

Hung up in the trade wrangling is a blockbuster deal for 100 of Boeing’s 777X and 787 jets, reported in June by Bloomberg News, which would be one of the largest wide-body sales on record if it comes to fruition. That would break an order drought by Chinese airlines that extends to October 2017, according to Boeing’s website.

Boeing and Airbus SE are also expecting a new wave of wide-body deals to fatten order books early in the 2020s, as airlines begin retiring aging A330, A340 and 777 models on a large scale. But there’s a growing risk that a recession, triggered by the trade turmoil, could thwart that wave of jet replacements.

“Let’s play worst-case scenario: We have a global recession in 2020,” said David Pritchard, who tracks aerospace manufacturing as an associate professor at State University of New York Empire State College. “Who’s going to backfill the 787 if there’s a recession?”