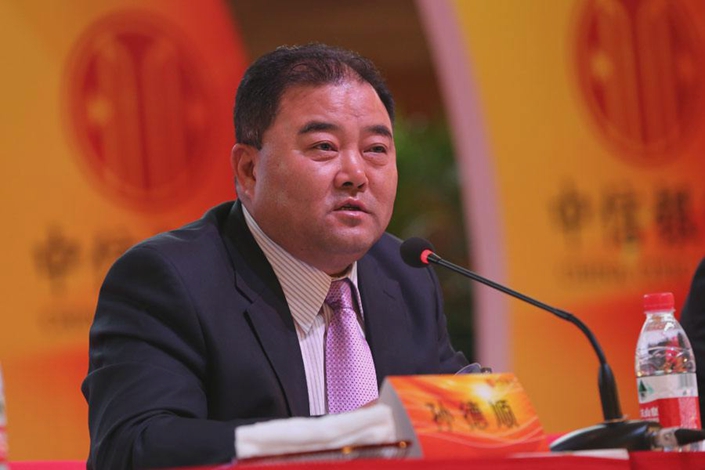 Sun Deshun at a press conference in 2014. Photo: sseinfo.com

The former head of a banking arm of one of China’s largest financial services groups, Sun Deshun, has fallen under official investigation, sources familiar with the matter told Caixin.

It remains unclear why Sun, a former president of China Citic Bank Corp. Ltd., is under investigation or which official body is investigating him. No official statement about the probe has been released.

The Hong Kong- and Shanghai-listed bank is a subsidiary of state-owned conglomerate Citic Group Corp.

Sun’s case might be linked to a criminal case involving one of Citic Group’s asset management subsidiaries, the sources said.

In mid-2018, a former chairman of Citic CP Asset Management Co. Ltd., Bao Xueqin, came under criminal investigation over a series of irregular actions, including a transaction on March 10, 2016, in which Citic CP transferred its stakes in a real estate project, worth 2 billion yuan ($282.1 million) in total, to a company that was later controlled by his son, people with knowledge of the matter told Caixin. His son’s company sold the stakes the same day for a profit of 2 billion yuan.

Sun, 60, resigned as president of Citic Bank in February because of his age, the bank said at the time in a securities filing. The veteran banker had worked at the central bank and two big state-owned commercial banks before he joined Citic Bank in late 2011.

Sun remains chairman of Hong Kong-based China Citic Bank International Ltd. (CBI), a subsidiary of Citic Bank. His relatives and subordinates — including his wife, secretary and chauffeur — have also been asked to cooperate with the investigation, the sources said.

A veteran financial regulatory official told Caixin that Sun was the subject of numerous complaints, which was due in part to the fact that he was in charge of Citic Bank’s corporate banking business. In recent years, he allowed the bank to lend enormous sums to several large private companies when they were in financial trouble, including HNA Group Co. Ltd. and China Fortune Land Development Co. Ltd.

As of the end of last year, Citic Bank and other Citic Group subsidiaries had jointly provided 625.8 billion yuan in financing to its corporate customers, equivalent to around 30% of its total outstanding corporate loans, according to Citic Bank’s 2018 annual report.

CBI has its own troubles. In April 2019, the Hong Kong Monetary Authority and Hong Kong’s Securities and Futures Commission looked into the company for its high-risk endeavors, especially its financing business and related-party transactions associated with Xinhu Zhongbao Co. Ltd., a Shanghai-listed property firm that is one of CBI’s shareholders.