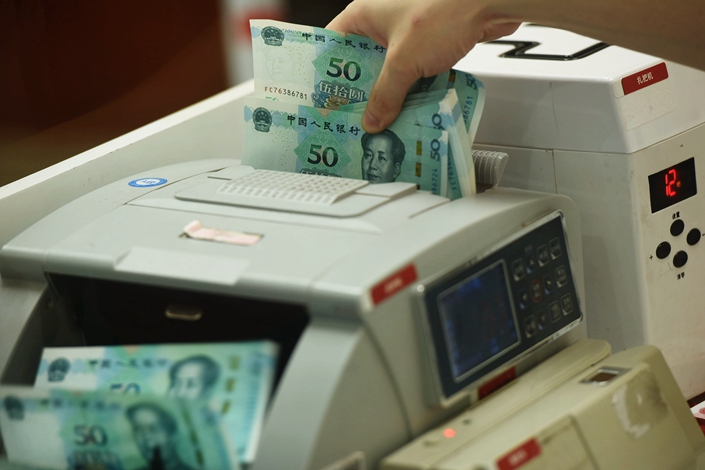 Financial regulators in eastern China’s Zhejiang province have doubled down on efforts to enforce a ban on consumers using loans and credit cards to invest in other assets such as stocks, property and wealth management products amid continued concerns that individuals are borrowing money under false pretenses to speculate in the financial and real-estate markets.

Banking institutions in the province have been told to set up monitoring and early warning systems to identify and even block transactions that could be used for illicit purposes, according to a notice issued recently by the Zhejiang bureau of the China Banking and Insurance Regulatory Commission (CBIRC) which has been seen by Caixin. Work to set up the systems should in principle be completed by the end of the year and branches should actively seek the support of their head office to get them ready, according to the notice.

Consumer lending is increasingly in the crosshairs of China’s regulators amid growing concerns about the risks stemming from a surge in household debt over the last few years. The government is worried that some of the money is being channeled into buying property, which undermines its efforts to rein in house prices, and into high-yield wealth management products and risky peer-to-peer lending.

In June, the CBIRC’s Zhejiang bureau fined the Hangzhou branch of Bank of Nanjing 1.7 million yuan ($239,803) for failing to manage consumer loans properly after finding money borrowed by its customers had been used to buy homes and stocks and to invest in privately offered funds.

China put regulations in place in 2011 that require every individual to be given an overall credit limit that comprises money he or she could borrow through various channels including different credit cards, instalment loans, cash loans, and supplementary credit cards. The Payment & Clearing Association of China, a self-regulatory central bank-backed body that oversees institutions’ payment and clearing services, issued further guidance in 2014 requiring banks to monitor and control the borrowings of customers who hold multiple credit cards to ensure they don’t take on too much credit.

The CBIRC began to reinforce the need to comply with the regulations in May and the notice from the Zhejiang CBIRC appears to be taking compliance a step further.

According to the notice, the monitoring system should automatically block loans sent to a third-party bank account bearing the same name as the customer and flag cases where money is going to “sensitive” areas such as property, wealth management products and the fintech markets. If the borrower keeps trying to complete the transfer, their account must be checked and the loan withdrawn if any violations are found.

The regulator has told banking institutions to pay extra attention to large consumer loans. If a customer racks up loans of more than 50,000 yuan ($7,044.73) cumulatively, banks should increase monitoring of their account, according to the notice. If one customer’s cumulative credit exceeds 300,000 yuan, banks need to obtain evidence of the purpose of the consumption and if it tops 1 million yuan, banks should in principle verify that the goods or services have actually been bought or whether the money was spent elsewhere.

On a national level, CBIRC regulations stipulate that all loans of more than 300,000 yuan to be transferred directly to the seller of the goods or services, a process known as consignment, rather than channeled via the borrower. The notice from the Zhejiang bureau requires banks to prioritize consignment even for loans of less than 300,000 yuan to prevent customers from breaking down the loan into smaller amounts and using it for other purposes.

But a banking industry executive in Zhejiang told Caixin that although the increased supervision is well-intentioned, in reality banks will find it very difficult to implement the rules across the board and it could lead to selective implementation.

Banks just don’t have the technological capabilities to do what the regulator is requiring, he said. A bank can only monitor transactions within the bank, and if customers transfer money to a different lender or outside the formal banking system, such as to third-party payment providers like Alipay, the bank can’t track the entire transaction chain, the executive said. A proper system needs to be designed at the institutional level instead of leaving it to individual banks, the person added.

“It’s just not practical to ask customers to submit receipts for everything they buy,” he said. “Payments are usually made through mobile applications such as WeChat so we’ll need sophisticated software to allow customers to submit information from mobile applications. It’s also debatable whether banks have enough manpower to verify the information.”

Caixin has learned that a large number of small and medium-sized banks are working with third party agencies that help borrowers obtain loans and are requiring these agencies to guarantee to repay debt if borrowers default. Consequently, many banks are less motivated to assess the risks of their loans.

The government started a deleveraging campaign in late 2015 to curb excessive borrowing, but while corporate and local government debt as a share of gross domestic product has stabilized, household debt has continued to grow. China’s household leverage ratio climbed to 55.3% at the end of the second quarter, more than double the level at the end of 2010, according to a report released by the National Institution for Finance & Development and the Institute of Economics at the Chinese Academy of Social Sciences in late August.