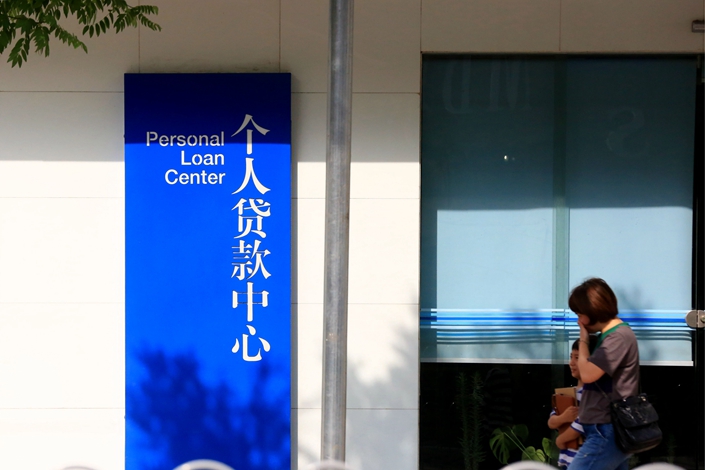 China’s banking regulator is tightening its supervision over personal loans amid growing concerns about the surge in household debt.

Since the end of June, local bureaus of the China Banking and Insurance Regulatory Commission (CBIRC) in cities including Shanghai, Shenzhen and Ningbo, and provinces including Yunnan have found at least 13 cases where banks violated rules on the approval of personal loans, including credit card borrowing, according to Caixin calculations based on public records.

Bank of Communications Co. Ltd. and Agricultural Bank of China Co. Ltd. were fined 400,000 yuan ($57,000) and 200,000 yuan, respectively, in July for failing to follow regulations on managing limits on credit cards, according to two releases by the Shanghai Office of the CBIRC last week. The office also fined another five banks in mid-July for the same transgression.

The fines are likely to be related to tighter supervision of credit cards, a person working for the credit card department of one lender told Caixin. The change has affected banks’ credit card businesses, although it’s hard to quantify the impact as other factors, including lenders’ strategy on card issuance, are also playing a part, the person said.

The CBIRC started to reinforce the need to follow rules on borrowing in May, especially with regard to lending money within a person’s limit after subtracting outstanding balances on each card from that individual’s total credit limit, the person said.

Regulations first announced in 2011 require every individual to be given an overall credit limit that comprises money he or she could borrow through various channels including different credit cards, installments loans, cash loans, and supplementary credit cards. The Payment & Clearing Association of China, a self-regulatory central-bank backed body that oversees institutions’ payment and clearing services, issued further guidance in 2014 requiring banks to monitor and control the borrowings of customers who hold multiple credit cards to ensure they don’t take on too much credit.

The Chinese phrase for this practice, “rigid credit subtraction,” wasn’t included in the 2011 rules or the 2014 guidance, but the regulator has been emphasizing it for at least three years to make banks aware of the danger of excessive credit issuance, a deputy manager with the credit card department of a large state-owned bank told Caixin. The CBIRC has been paying even more attention to the rule this year, forcing banks to follow the practice more tightly, the person said.

In addition to punishing violations in the credit card business, regulators have also fined banks for failing to follow rules on consumer loans. The CBIRC’s Shenzhen office, for example, fined the local branches of China Guangfa Bank Co. Ltd. and Agricultural Bank of China after it discovered some consumer loans or money borrowed through credit cards they issued ended up being used to buy homes or pay property-related fees.

The crackdown on improper consumer lending is taking place amid increasing concerns about the growth in borrowings taken on by individuals over the past few years. The government is also worried that some of the money is being channeled into buying property which undermines its efforts to rein in house prices.

At the end of 2018, the debt accumulated by China’s households amounted to 52.6% of the country’s gross domestic product (GDP), up from 39% in 2015, data from the Bank for International Settlements show. Fitch Ratings, a global ratings company, estimated in July that household debt had risen to 85% of disposable income at the end of last year, although that’s still lower than many developed countries. In absolute terms, the debt rose by 18.2% in 2018, nearly double the rate of nominal GDP growth, Fitch said, driven mainly by mortgage loans and, to a lesser extent, credit card borrowing. At the end of 2018, China’s outstanding credit card debt was similar to the U.S. at $1 trillion.

“The rapid pace of household debt growth in China is more of a concern than the level,” Fitch said in the report. “Should China’s gap with international peers effectively close in the next two to three years, this would add considerably to the country’s overall macroeconomic vulnerabilities, given the corporate debt burden that is already among the world’s largest by most measures.”

Although on a national level, the household leverage ratio is under control, in some provinces it needs “immediate attention,” according to a July note by the macroeconomic research team of Shanghai-based Guotai Junan Securities Co. Ltd. At the end of 2018, there were eight provinces where the household leverage ratios had surpassed the national average, with Zhejiang hitting 76%, the highest, and Shanghai 68%, the second, the note said. Among 11 cities where leverage ratio data were available, Xiamen, a coastal city in Fujian province, was the most debt-ridden with a 96% leverage ratio.