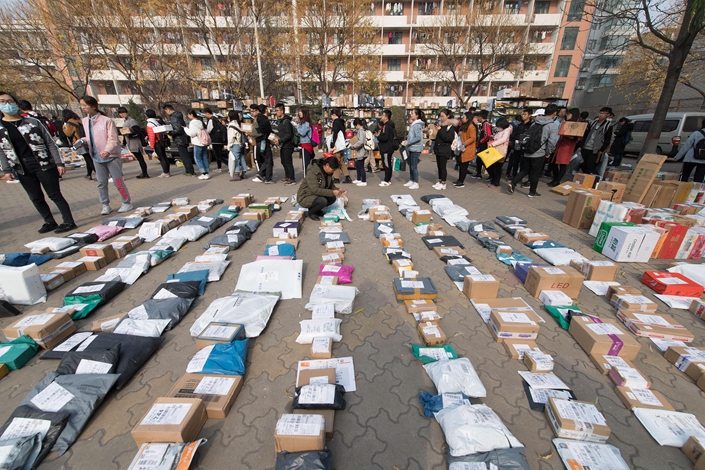 College students line up to pick up their packages at a courier station at Shanxi University in Taiyuan, North China’s Shanxi province, on Nov. 14. Photo: VCG

The banking regulator in Central China’s Hubei province said it would encourage banks to lend more to students, after college campuses were targeted by loan sharks.

The Hubei branch of the China Banking and Insurance Regulatory Commission said on Sept. 12 that it would try to urge banks to lend between 8 billion yuan ($1.12 billion) and 10 billion yuan to college students in the province, which would amount to around 5,000 yuan per student, local Communist Party committee-run newspaper the Hubei Daily reported on Friday. The report said that the move aims to provide students with access to credit and crowd out illicit lenders.

Illicit loans to students made headlines when it was revealed that loan sharks had demanded nude photos from female borrowers as collateral with the threat of posting the pictures online or sending them to relatives. Loan sharks also blackmailed debtors by threatening to tell their schoolmates and teachers about their financial situation.

It’s unreasonable for a banking regulator to urge banks to issue loans to students as there’s no proper system in place yet for risk prevention, a staffer with China Construction Bank Corp. commented.

Last year, Baihang Credit Scoring, a central bank-backed credit agency, was established with the goal of pooling information, mainly from lending channels that are not subject to the central bank’s credit reporting system. But the agency has been struggling to collect quality data.

Several major banks, including the “Big Five” state-owned commercial banks, have already developed consumer loans or credit cards especially for college students. For instance, China Merchants Bank Co. Ltd. offers loans of up to 8,000 yuan, which can be paid off over a two-year period, according to a statement (link in Chinese) on its website. The daily interest rate on these loans can be as low as 1.7 yuan a day per 10,000 yuan, which means that the annual interest rate is around 6.2%.

“There is marketing for loans everywhere,” Wang Yifeng, then research head of China Minsheng Banking Corp. Ltd.’s financial development institute, told Caixin in an interview last year. “Will it lead to irrational borrowing by young people? Do they really need to borrow and where do they spend the money?”

“Consumer finance can be easily stimulated by over-marketing,” Liu Chengqing, executive director of research institute the Chinese Academy of Financial Inclusion, told Caixin last year. “China is counting on consumption to drive the economic growth, but relying on overspending by low-income groups could be dangerous.”