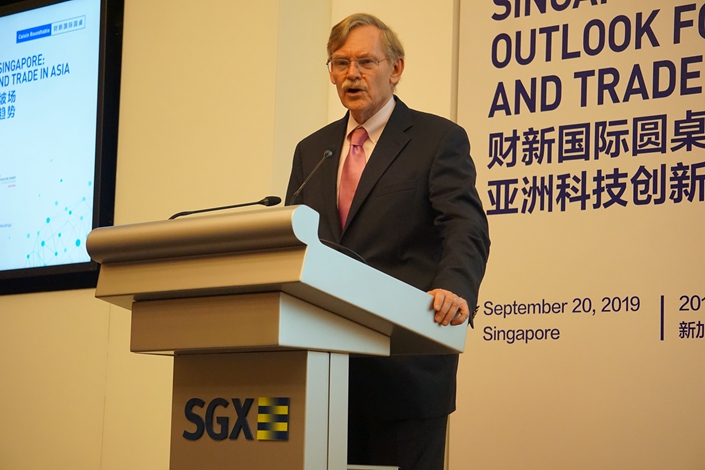 A former top U.S. trade negotiator has warned that the U.S.-China struggle over technological supremacy could lead to a “decoupling” and a “tragedy” for the world economy.

Speaking at a Caixin roundtable in Singapore on Friday, Robert Zoellick, a former U.S. trade representative and president of the World Bank, said that “some members of the [Trump] administration” want to block China’s access to advanced American technology.

He said such a split has already been occurring in sectors including telecommunication and information services, while “strong common interests” remain in some areas such as life sciences and robotics.

After decades of globalization and supply chain integration, “if you have a bifurcation in the technologies of future,” he said, “it would frankly be a tragedy — not only for the two countries but for the world economy.”

Zoellick’s comment came as the world’s two largest economies are fighting a protracted trade war in which they have exchanged tit-for-tat tariffs. The U.S. has also accused China of intellectual property theft and forced technology transfer.

Washington has launched an aggressive campaign to convince its foreign allies and partners to reject China’s 5G technology and Chinese telecom giant Huawei, and has seen the visas of Chinese students studying in the U.S. delayed.

In response to the deteriorating bilateral ties, Zoellick said the two countries have to address each other’s concerns and “find more common ground” to prevent a global economic tragedy.

The latest exemptions to the U.S.’ Huawei ban may indicate the two sides have been working to find common ground after Washington cut off the Chinese company’s access to its U.S. suppliers in May.

American chipmaker Qualcomm’s CEO said this week that the company has continued selling some products to Huawei exempted from the ban on U.S. sales to the embattled telecom giant, and is now applying for permission to sell products over the longer term. This followed the White House’s August grant of another 90-day reprieve for Huawei to continue buying some U.S. products.

The former World Bank chief also rejected a widely accepted argument among China hawks in the U.S. that America’s engagement policy, starting from supporting China ascension to World Trade Organization in 1990s, has failed to integrate Beijing into the international system.

Zoellick, however, said that such notion is “flat wrong” and that China can actually contribute “fresh ideas.”

Citing the case of the Beijing-based Asian Infrastructure Investment Bank (AIIB), Zoellick said that is “a good example of a very constructive innovation by China,” which “built on ideas of transparency, anti-corruption and environmental policies.”

“I hope other countries can recognize that China can also bring fresh ideas to the international system,” he said.

The United States has not agreed to join the China-led investment bank.

Furthermore, he suggested China’s massive Belt and Road Initiative infrastructure plan should adopt the AIIB model as an effort to increase transparency.

Due to a lack of transparency in the Belt and Road, he said it is difficult for the United States to understand whether the initiative is a simple infrastructure plan, a way to export China’s excess production capacity, or a plot by Beijing to seek influence in Eurasia.

Despite the confrontational attitude from the U.S., Beijing and Washington “really have to figure out some way to get along,” Zoellick said in a separate interview with Caixin.

He predicted that the two countries’ relations will be a “mixture” of both competition and cooperation.

He said China and the U.S. need to find ways to cooperate on issues such as climate change, disease, global economic stability, and growth and prosperity, while the U.S. will stick to its core principles when it comes to security issues.

“There are reform forces in China, particularly in the economic space that actually share some of the interests of opening up the economy,” he said.

“You could have found forces in China that work with you on those topics and be just as successful without getting into a tariff war,” he said.