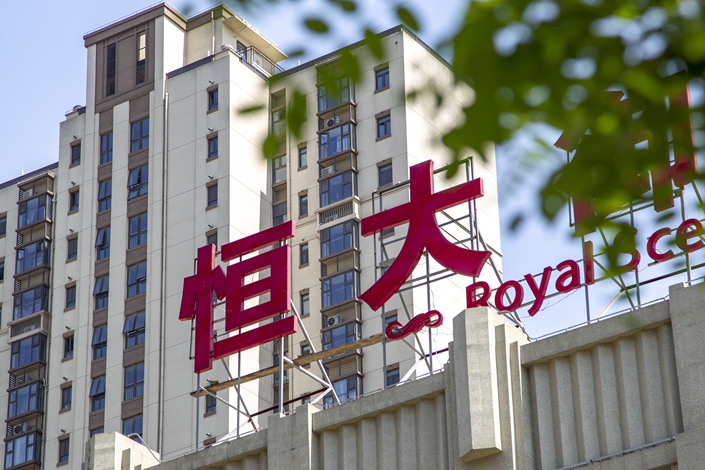 A residential building built by Evergrande in Shanghai on May 3. Photo: VCG

Angry owners of homes sold by one of China’s largest developers in Zhaoqing, South China’s Guangdong province, vented their fury at the company earlier this month after it slashed house prices for new buyers to boost sales.

Homeowners who had already paid the original asking price crowded a local sales office of China Evergrande Group at a development in Zhaoqing’s Dinghu district to demand refunds.

Some told Caixin they were riled by the property giant’s decision to knock hundreds of thousands of yuan off the asking price for certain apartments.

A Dinghu government official told Caixin that over 100 homeowners had demanded refunds on their homes. To ease social unrest, the district’s housing development bureau advised Evergrande on Oct. 7 that it would suspend approval for the developer to use its pre-sale capital until homeowners get all their refunds.

Since 2015, buyers into Evergrande housing projects have benefited from a promotion ploy used by the developer that makes them eligible for refunds before the homes are handed over. Evergrande said it takes up to six months for the refunds to be paid.

Similar protests involving dissatisfied buyers have been reported this month in third- and fourth-tier cities in East China’s Jiangxi province and suburban Shanghai amid weakening housing demand in smaller cities.

September and October are the busiest months for home sales with major developers, including China Vanke Co. Ltd. and Country Garden Holdings Co. Ltd., counting on sales in these “gold and silver” months and offering huge discounts to clear unsold stock.

But housing demand is cooling in many of China’s smaller cities which are experiencing bigger impacts than first- and second-tier cities from government efforts to cool property prices amid weakening economic growth.

In the first nine months of this year, new homes with a total floor area of 163 million square meters were sold in 64 smaller cities monitored by Shanghai E-House Real Estate Research Institute.

The number of sales fell by 7.9% year-on-year, compared to a drop of 7.1% in the first eight months, according to an institute report in late September.

By comparison, the report found that total residential property transactions in the four first-tier cities was up 53.9% for a total floor area of 22 million square meters.

Liu Jiefei contributed to the report