In Depth: How $2.7 Billion of Fake Gold Tarnished Local Lending

By Xiao Hui and Han Wei 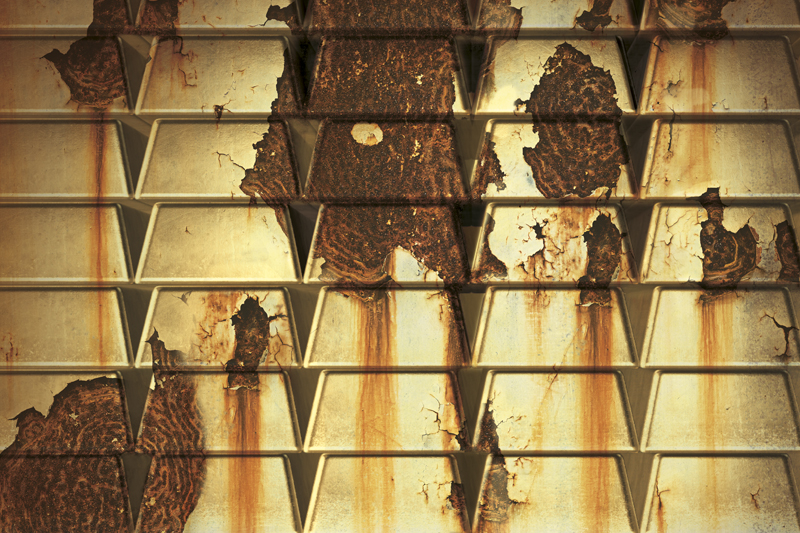 Adulterated gold was found to be used as collateral for $2.7 billion of loans in Shaanxi. Photo: VCG

In the summer of 2015, a plainly dressed farmer claiming to be Yang Jun walked into the Rural Credit Cooperative of Tongguan County in Shaanxi province. He presented 26 shiny gold bars and applied to borrow 20 million yuan ($2.8 million) from the rural financial institution against the nearly 100 kilograms of precious metal.

The scene surprised no one at Tongguan Co-Op, which is supposed to serve rural financial needs in a county known for its rich gold reserves.

Located in the junction of Shaanxi, Henan and Shanxi province in northwest China, Tongguan with about 154,200 residents is known to have more than 110 tons of gold deposits under the Qinling Mountains. Gold mining accounts for more than 70% of Tongguan’s local economy.

In 2005, shortly after China removed restrictions on personal investments in gold, Tongguan Co-Op along with other local financial institutions initiated gold-backed loans for individual borrowers. Since then, farmers carting in heaps of gold bars for loans became common at Tongguan Co-Op, a local source told Caixin.

But confidence in the seemingly secure business suddenly collapsed in 2016, putting lenders’ careless handling of the booming business under the spotlight. The trigger was the 20 million yuan loan to Yang.

In April 2016 after failing to collect repayment from Yang, Tongguan Co-Op decided to melt his gold bars to sell the metal for cash. But as the shiny gold on the surface melted away, dark black tungsten plate appeared underneath. Tongguan Co-Op found that the bars pledged by Yang contained only 36.5% pure gold.

Tongguan Co-Op’s problem blew the lid off China’s largest gold-loan fraud case. A subsequent inspection by the top banking regulator found tons of adulterated gold in 19 lenders’ coffers in Shaanxi and neighboring Henan held as collateral for 19 billion yuan of loans including those at Tongguan Co-Op.

Tongguan Co-Op and its parent Shaanxi Rural Credit Cooperatives Union were hit the hardest by the gold-loan fraud. As of May 2016, Tongguan Co-Op had 8.4 billion yuan of gold loans outstanding, involving 46 tons of fake gold. Large state lenders including the Commercial and Industrial Bank of China (ICBC) and Postal Savings Bank of China (PBS) also found substandard gold collateral in local branches for loans totaling billions of yuan, Caixin learned.

Investigators found that most of the questionable loans flowed into five personal accounts controlled Henan businessman Zhang Qingmin, a founder of gold refiner Lingbao Boyuan Mining Industry Co. Ltd., and his associates. The five manufactured adulterated gold bars and hired people to apply for loans, Caixin learned from sources close to the investigation.

In the nearly four years since fake gold bars were found at Tongguan Co-Op, the case has continued rattling Shaanxi’s financial sector as lenders struggle to deal with huge losses. Police arrested four of the five major suspects along with dozens of accomplices, but the leading player Zhang is still at large. The four others stood trial earlier this year and are awaiting verdicts. Eight employees at Tongguan Co-Op were also criminally charged.

In May 2016, police sealed Boyuan Mining Industry in Henan. The company, established in 2007 by Zhang Qingmin and his brother Zhang Shumin, was a leading gold refiner in Lingbao city.

But police found a dark side of Boyuan Mining’s business — fabrication of adulterated gold bars in a hidden corner of its factory complex for use as pledges for loans. The substandard gold bars found at Tongguan Co-Op and other Tongguan lenders were all produced by Boyuan Mining, Caixin has learned.

The Zhang brothers were no longer listed as Boyuan Mining’s shareholders after transferring their stakes to Xu Jianbo and Wang Xuewen in 2014. Xu and Wang were among the four arrested by police on the gold-loan fraud.

People familiar with Zhang Qingmin said the 34-year-old Lingbao native was among the early local gold miners and made his fortune from gold ore trading. A person said the Zhang brothers figured out a method for producing gold bars using tungsten, which weighs almost as much as gold. The bars look exactly the same as standard gold bars but contain only 36% pure gold.

In 2011, the Zhangs started using adulterated gold to obtain loans and invested the proceeds in real estate, trusts and funds or transferred money overseas through underground banks, sources said. Zhang Qingmin alone obtained 8.4 billion yuan of loans with adulterated gold, according to investigators.

As the fake gold bars at Tongguan Co-Op caught the attention of regulators, the Zhangs and their families fled China. According to police records, Zhang Qingmin flew to Portugal via Cyprus on May 12, 2016, and is now sought on an Interpol red notice, an international arrest warrant.

A person close to Tongguan Co-Op told Caixin that since the cooperative made its first person gold loan in 2005, people have raised doubts about its increasing reliance on such business and the potential risks.

In 2014, then head of the Shaanxi Rural Credit Cooperatives Union warned Tongguan Co-Op about its overreliance on gold loans and lax management of gold collateral following a visit to the lender.

A document seen by Caixin showed that the Shaanxi branch of the People’s Bank of China in 2015 sent an alert to Tongguan Co-Op, warning of the risk of money laundering by several clients whose accounts showed frequent money transfers. But the co-op replied that it had “verified the clients’ identity and their transactions were normal.”

There were hundreds of borrowers from neighboring villages ages 18 to 80 applying for loans with gold at Tongguan Co-Op. With the money flowing to only five accounts, “how come professional credit officers didn’t raise questions on this?” a financial industry source said.

According to the report, Tongguan Co-Op allowed borrowers to use new loan to repay interest on existing loans, sheltering potential bad loan risks. The co-op also turned a blind eye to repeated use of the same batch of gold by different borrowers for multiple loans, Tongguan Co-Op employee Xu Xianghong said.

A police record seen by Caixin showed that a former risk control official of Tongguan Co-Op acknowledged that his department didn’t verify all documents provided by borrowers before approving loans.

The fast-growing gold-loan business offered rewards to Tongguan Co-Op not only in rising interest income but also government subsidies for rural lending. The Shaanxi Rural Credit Cooperatives Union investigation found that Tongguan Co-Op included some of the gold-backed loans in its statistics for agriculture-related lending eligible for government rewards. Between 2010 and 2013, the co-op received a total of 3.9 million yuan of subsidies from the Ministry of Finance for rural lending.

In 2016, eight senior executives of Tongguan Co-Op including a former chairman and director were detained. They were formally charged in May this year with issuing illegal loans, a crime that could be punished with about five years of imprisonment, and are awaiting trial.

The banking industry regulator imposed 36 million yuan of penalties on Tongguan Co-Op and several other subsidiaries of Shaanxi Rural Credit Cooperatives Union. Other lenders in the case also received penalties and fines.

Controversies and turmoil caused by the scandal have yet to be resolved.

Families of the eight Tongguan Co-Op executives who were charged complained of unfair treatment as no executive at other institutions involved in the case has been pursued on criminal charges.

Caixin learned that local graft busters also launched investigations of officials in the Tongguan branches of ICBC and PSB involved in the case, but no information was made public.

Meanwhile, financial institutions are struggling to deal with the huge losses caused by the fraud. Caixin learned Tongguan Co-Op faced 3.4 billion yuan of losses from the loans and is now relying on funding from the parent institution to maintain operations.

With leading suspect Zhang at large, courts are unable to dispose of assets seized by police, leaving institutions with greater uncertainties about recouping losses.

Rural cooperatives are often less resilient to risks, and the massive gold-loan fraud has caused a huge blow to the intuitions, a Shaanxi financial industry source said, warning of the danger of systemic risks in the local financial sector.

A previous version of this story incorrectly stated that Boyuan Mining Industry was a designated supplier of standard gold bars to the Shanghai Gold Exchange.