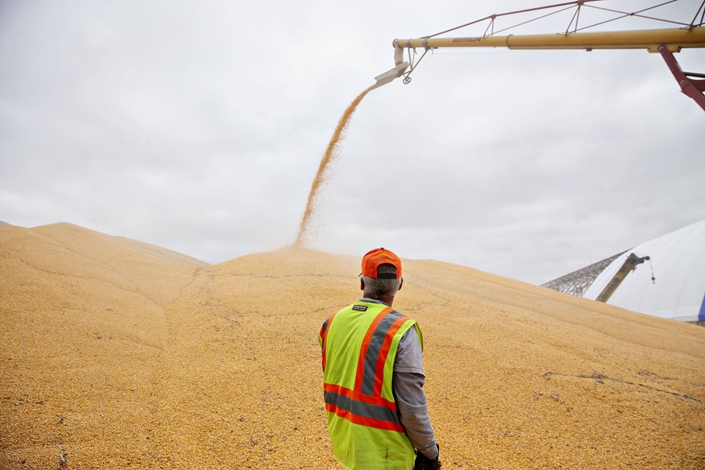 A worker monitors corn as it is loaded into an outdoor storage bunker in Sheffield, Illinois, U.S., Oct. 2, 2018. Photo: Bloomberg

(Bloomberg) — U.S. farmers may return to pre-trade war levels of sales to China in time for the presidential election year, relieving economic pressure on one of Donald Trump’s key political constituencies as he campaigns for a second term and fights an impeachment inquiry.

But the bonanza of $40 billion to $50 billion in annual agricultural sales to China that Trump promoted when he announced a tentative partial trade deal on Oct. 11 will almost certainly have to wait until after the presidential vote, if it ever comes. And China’s added purchases also come with strings attached.

China aims to buy at least $20 billion of agricultural products in a year if it signs a partial trade deal with the U.S., and would consider boosting purchases further in future rounds of talks, people familiar with the matter said.

That would take China’s imports of U.S. farm goods back to around 2017 levels, before Trump began a tit-for-tat tariff feud with Beijing. In the second year of a potential final deal, purchases could rise to $40 billion to $50 billion. But that would depend on Trump removing remaining punitive tariffs, said the people, who asked not to be named because talks are private.

The market reaction to China’s pledge was relatively muted, with Chicago soybean futures climbing less than 0.5% but staying below highs from earlier this week. Corn, wheat and hog futures were either little changed or down. Still, soybean futures, often a bellwether for the trade talks, are up about 10% since early September as prospects for a trade deal improved.

Trump already has raised expectations that he and Chinese President Xi Jinping will sign a phase-one deal when they meet in Chile next month. Chinese officials also have said talks are progressing. The signal from China on first-year purchases provides a clearer picture on the deal taking shape.

When trade talks wrapped up in Washington on Oct. 11, Trump said China would lift agriculture purchases to between $40 billion and $50 billion. The people didn’t say when the first year would start or when China would begin counting imports toward the $20 billion.

The two nations are working on details of a limited agreement, after talks in Washington earlier this month at which the U.S. agreed not to hike tariffs in October, and said China agreed to increase purchases and other concessions.

U.S. Trade Representative Robert Lighthizer, Treasury Secretary Steven Mnuchin and Chinese Vice Premier Liu He are scheduled to speak by phone on Friday as they try to get a deal down on paper. U.S. Commerce Secretary Wilbur Ross said any agreement on contentious structural issues will wait for two additional phases.

While in 2017 China’s $20 billion agricultural purchases was heavily weighted toward soybeans, the nation’s need for pork is now greater because an outbreak of African swine fever has devastated its hog herd and sent pork prices soaring. INTL FCStone Inc. said in a note that the coming purchases are likely to be skewed more toward pork.

“The bottom line is that China’s history tells us that it will buy what it needs to buy — to meet domestic needs or political needs — and no more or no less, regardless of the commitments that it makes,” FCStone said in the note.

“We are still in the same position we were in a couple of weeks ago when news of the partial agreement was first announced, where we need confirmed details to adequately respond,” said Wendy Brannen, a spokeswoman for the American Soybean Association.

“China is struggling with food price inflation and needs reliable sources of pork,” said Jim Monroe, a spokesman for the National Pork Producers Council. “We know U.S. pork exports to China can grow significantly and that this alone could put a big dent in the trade deficit with them. We continue to seek the permanent removal of punitive tariffs on U.S. pork so we can address this important need in China.”

China has already started ramping up purchases to lay the groundwork for the signing of a phase-one deal. Beijing issued waivers for 10 million metric tons of soybean purchases this week. It’s considering approving an additional 4 million to 5 million tons of grains, including wheat, corn and sorghum, according to people familiar.

Data out of the U.S. Department of Agriculture was a mixed bag. Sales of both U.S. soybeans and pork to China slumped in the week ended Oct. 17. However, the USDA separately announced a daily sale of 264,000 tons of U.S. soybeans to China.