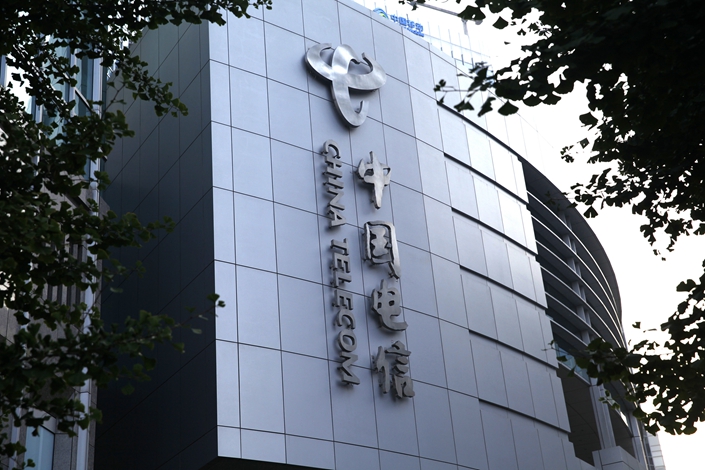 China Telecom Corp. Ltd. on Monday reported its profit plunged 18% in the third quarter due partly to a one-time gain the previous year, as it struggled to post revenue growth amid stiff competition in the nation’s maturing wireless market.

China Telecom’s report makes it the last of the nation’s three major carriers to announce their latest results, with all reporting anemic revenue growth. All three are being hit by slowing subscriber additions, as most of the people in China old enough to have service have now signed up for plans. China Telecom, China Mobile and China Unicom have also taken a hit from the recent elimination of domestic roaming fees, which were once a lucrative revenue source.

China Telecom’s revenue rose just 0.4% to 92.3 billion yuan ($13.1 billion) in the third quarter, according to calculations by Caixin using data for the first three quarters of the year. That marked an improvement from the 1.3% revenue decline in the first half of the year, as the company’s business began to stabilize following the elimination of domestic data roaming fees by all three of the nation’s wireless carriers last July.

The company’s profit fell 18% for the quarter to 4.5 billion yuan, partly due to the effect of a one-time gain the previous year from the spinoff of its cell tower assets to help form cell tower operator China Tower, which made an IPO last year. China Mobile and Unicom made similar spinoffs under the direction of China’s telecom regulator, which dictates such macro policies for all three state-owned companies.

Excluding effects of the cell tower asset spinoff, the company would have reported a 2.5% gain in profit for the first three quarters of the year, compared with the 3.4% decline that it actually reported, the company said.

China Telecom’s mobile subscribers grew slightly to 330 million at the end of September from 323 million three months earlier, again reflecting the slow growth for all three carriers as the market matures.

China Telecom and its two rivals are all in the process of building costly 5G networks, as Beijing aggressively promotes the high-speed wireless technology that will power many data-intensive apps of the future like telemedicine and autonomous driving. But China Telecom and Unicom — which are significantly smaller combined than China Mobile — got a major break over the summer when the regulator allowed them to co-build a network rather than each build one separately.

“The company is now commencing the cooperation on 5G network co-build and co-share with (Unicom),” it said in the announcement with its results. “The company believes that the cooperation is beneficial to the efficient construction of 5G network and to reduce network construction and maintenance costs while enhancing efficiency in network and assets operation, which enables us to rapidly create 5G service capability and strengthen network quality and business experience so as to achieve a win-win situation for both parties.”

Last week China Mobile reported its revenue slumped 0.2% in the first nine months of the year, while its profit fell 13.9% for that period. Unicom’s revenue also dipped 0.7% over the nine months, though its profit rose 11.9%.