Opinion: Economy Will Decide If Trump Wins in 2020 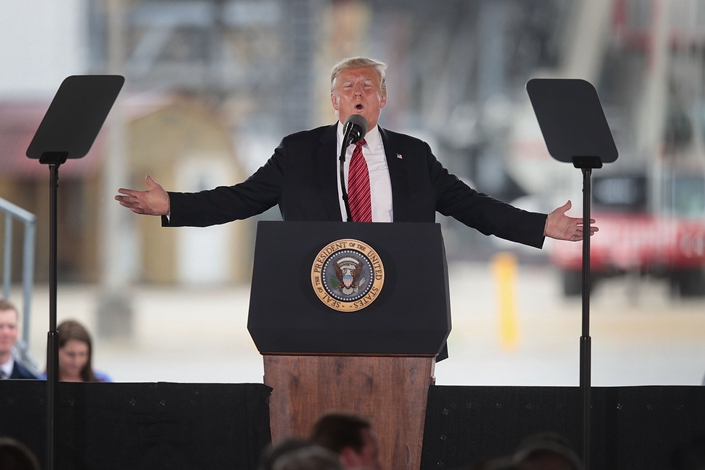 A year from now, the United States will elect its next president. The stakes are high, and the outcome will reverberate across the world in a number of spheres, not least the economy. Yet, thus far, most discussions of candidates’ economic policy proposals have been based more on feelings or ideology than rigorous analysis.

Barring a major unforeseen catastrophe, U.S. economic performance will play a decisive role in the election. If the economy remains strong — unemployment is at a 50-year low for all workers, and its lowest-ever level for African-Americans and Hispanics — President Donald Trump stands a good chance of winning a second term.

Yet downside risks are mounting. If they materialize, a Trump victory would become less likely. According to recent models by Moody’s Analytics, it would take a tanking economy — or unusually high voter turnout among Democrats, but not Republicans — for Trump to lose in 2020.

As center-left former Vice President Joe Biden, the early frontrunner for the Democratic Party nomination, loses ground to the far-left U.S. Senator from Massachusetts, Elizabeth Warren, Trump’s chances of success may be rising. Then again, in the 1980 election, the most conservative Republican candidate, Ronald Reagan, was also labeled unelectable.

If Trump does win a second term, he cannot always be expected to pursue traditionally conservative economic policies, such as his 2017 Tax Cuts and Jobs Act, which brought the U.S. corporate-tax rate in line with the OECD average. Judging by hints from him and his advisers, however, he can be expected to pursue another round of regulatory and tax reform.

Meanwhile, Democratic presidential candidates favor expanding the social safety net, beginning with health care. While some want to build on President Barack Obama’s 2010 Affordable Care Act — which Trump and congressional Republicans failed to “repeal and replace” — others hope to eliminate private insurance, on which two-thirds of Americans depend.

In place of private health insurance, Democrats like Warren and Vermont Senator Bernie Sanders plan to introduce a government single-payer system. The costs would be staggering — over $30 trillion in the first decade, by some estimates. Sanders would raise taxes; Warren is trying to dodge saying so. Given the price tag, that would have to mean massive income or payroll tax hikes, or a Europe-style regressive value-added tax, any of which would fall heavily on the middle class and weaken economic incentives.

But that is not all: Democrats also plan to introduce expensive subsidies, tax breaks, direct spending, loan forgiveness, and other giveaways, insisting that these proposals can be funded largely by increasing taxes on the wealthiest Americans. Biden wants to double the capital gains tax; Warren would almost double the top marginal income-tax rate from 37% to 70%, and both she and Sanders favor new wealth taxes, which even most Nordic countries have abolished. But their math does not add up, by at least an order of magnitude.

There is one area where Trump and the Democrats both want to spend more: infrastructure. Repairing and maintaining roads, ports, and airports is partly the federal government’s responsibility, but state, local, and private finance should be expanded. Neither Trump nor any of the Democratic candidates seeking to challenge him has put forward a serious plan. With neither party focused on fiscal responsibility, the growing unfunded liabilities in Social Security and Medicare, several times the national debt, mean Americans will face far more damaging tax hikes or draconian spending cuts in the future.

Trump and his Democratic opponents diverge much more sharply on government regulation. Trump has made rolling back excessive Obama-era regulations a high priority. While courts have blocked some of his efforts, as they did to Obama, he has successfully weakened or repealed a number of measures on energy and the environment, health care, and finance that Republicans deemed too costly.

The Democratic candidates, especially Warren, hope to do just the opposite. Some favor stronger regulation and antitrust enforcement concerning Big Tech, while Sanders and Warren advocate breaking up the sector’s largest companies. All support the $10 trillion Green New Deal, an economically, scientifically, and numerically illiterate program, or even more radical plans. A Democratic president could also be expected to tighten financial regulation, and potentially even introduce radical changes to corporate law.

On trade, Trump has placed a high priority on changing dynamics that he considers unfair. It is on these grounds that he negotiated a modest revision to the North American Free Trade Agreement (NAFTA), which awaits congressional approval, and introduced escalating tariffs on China.

But the trade war against China that Trump launched last year has become a drag on business investment, dampening the positive effects of his tax and regulatory reforms. Fortunately, the U.S. and China recently reached a temporary agreement forestalling further tariff hikes while a more comprehensive deal is negotiated. Although the Democrats have often criticized Trump’s approach, they are not proposing further trade liberalization.

A final question to consider when assessing the U.S. presidential candidates is whom each would appoint as the next chair of the U.S. Federal Reserve. Trump – who has repeatedly criticized current chair Jerome Powell for pursuing too little monetary-policy easing — would probably select a dovish candidate.

A left-leaning Democrat might do the same, given the left’s fascination with risky ideas that promote massive amounts of Fed-funded debt. Center-leftists — Biden, Amy Klobuchar, Pete Buttigieg — might reappoint Powell, who has done a good job, or select a moderate Democratic economist, such as former Fed Vice Chair Alan Blinder or former Treasury Secretary Larry Summers.

With so many candidates still on the field, investors and financial markets seem to be awaiting stronger signals about the political future and the considerable, but different, economic and financial risks that a victory by each would entail.

Michael J. Boskin is professor of economics at Stanford University and senior fellow at the Hoover Institution. He was chairman of George H. W. Bush’s Council of Economic Advisers from 1989 to 1993.