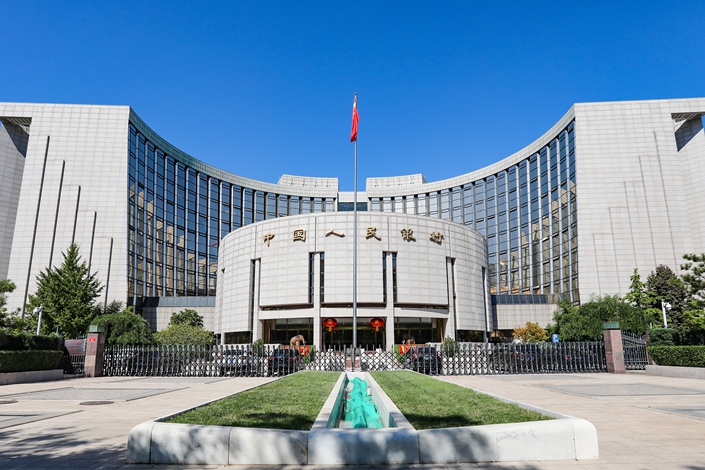 The People’s Bank of China reduced the interest rate on the one-year MLF by 5 basis points to 3.25%, the first cut since the interbank market instrument was introduced in 2016. Photo: VCG

China’s central bank took another step to lower borrowing costs on Tuesday to encourage lending amid growing downward pressure on the economy, implementing a small cut in the interest rate on the medium-term lending facility (MLF), a key reference used by banks to price their loans.

The People’s Bank of China (PBOC) reduced the interest rate on the one-year MLF by 5 basis points to 3.25%, the first cut since 2016, it said (link in Chinese) on its website. The central bank simultaneously announced it had handed out 400 billion yuan ($56.83 billion) to banks in one-year MLF loans, the first use of the facility since Oct. 16, to roll over 403.5 billion yuan of maturing debt.

“After keeping interbank rates broadly stable for most of this year, the PBOC is starting to take more direct steps to push down borrowing costs,” China analysts at research firm Capital Economics wrote in a note. “We think this could mark the beginning of a series of PBOC rate cuts,” they said, pointing out that this is the first reduction in over three years to the rates on any of the PBOC’s lending facilities.

The MLF has become a key part of the central bank’s policy toolkit to provide funding to banks and manage liquidity. It is also a way of transmitting changes in borrowing costs through the financial system as part of the PBOC’s overhaul of the interest rates system, which took a major step forward in August with the introduction of the Loan Prime Rate (LPR) as the new reference rate for borrowing costs banks charge their customers.

The new national LPR has two tenors — one-year and five-year-plus — and is set by averaging the LPR quotations submitted by 18 commercial banks after discarding the lowest and the highest quotes. The quotations are based mainly on a spread above the MLF rate.

The central bank announces the LPR rates on the 20th of each month and the cut in the one-year MLF rate on Tuesday has led some analysts to expect the one-year LPR will also be reduced later this month. The PBOC lowered the one-year LPR by 5 basis points in September but left it unchanged in October. However, the U.S. central bank, the Federal Reserve, cut interest rates for the third time this year on Oct. 30, and with the Chinese economy slowing, analysts have been expecting domestic borrowing costs to come down, albeit at a milder pace than in the U.S.

“The LPR reform in August this year, in addition to U.S. Fed rate cuts and China’s domestic slowdown, made MLF rate cuts only a matter of time,” analysts at Nomura International said in a research note. “We believe today’s MLF rate cut does not mark the end of this rate cut cycle."

The PBOC lowered the LPR in September even though it didn’t cut borrowing costs for the MLF, which influences the interest rates lenders submit to the central bank's National Interbank Funding Center to determine the one-year LPR. That squeezed the banks’ own net interest margins and they became less willing to lower their quotes, according to Zhong Zhengsheng, director of macroeconomic analysis at CEBM Group Ltd., an affiliate of Caixin Global.

But as a result of the lower interest rate on MLF loans, banks will likely now be more willing to lower their quotes on their LPR submissions.

Economists at ING Group expect the LPR to fall by 5 basis points on Nov. 20, to 4.15% for one-year loans and by the same amount for five-year loans, taking the rate to 4.80%. But Goldman Sachs analysts don’t forecast a reduction in the five-year rate because of the government’s “hawkish” stance on the housing sector.

Some analysts were surprised that the PBOC cut the interest rate it charges on its MLF loans because of the growing inflationary pressure in the economy. The consumer price index reached an almost six-year high in September due largely to soaring pork prices caused by a slump in supply due to the nationwide outbreak of African swine fever.

Although economists expect more interest rate cuts over the coming months to bolster slowing credit growth and support the economy, Nomura analysts say concerns about accelerating inflation may make the PBOC more reluctant to make further cuts in the MLF rate until the spring when the surge in pork prices will likely have peaked.

Capital Economics expects another 70 basis points of reductions in the MLF rate by the middle of next year. Goldman Sachs sees a reduction of 5-10 basis points as early as December, when two rounds of MLF loans are set to expire and will likely be rolled over.