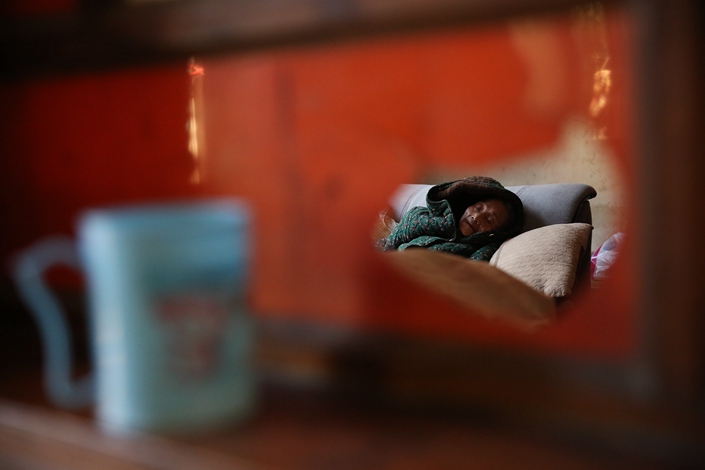 News that China’s medical regulator conditionally approved a novel, locally made drug to treat some symptoms of Alzheimer’s disease raised the hopes of many and prompted plenty of patriotic chest-thumping.

But while the drug’s mechanism sounds promising and reflects current research trends, questions persist over the scant evidence provided for its effectiveness and safety, drawing skepticism from industry insiders and researchers alike.

Oligomannate, or GV-971, was co-developed by Shanghai Green Valley Pharmaceutical Co. Ltd. and scientists from the Shanghai Institute of Materia Medica (SIMM), an affiliate of the Chinese Academy of Sciences, and Ocean University of China.

The drug, which is approved to treat symptoms of mild-to-moderate Alzheimer’s such as memory loss, sprung from a posited link between eating seaweed and resistance to the disease.

Its backers say the largest clinical trial, on about 800 people in China, “demonstrated solid and consistent cognition improvement,” but they have not published those findings. Experts in China and abroad say they want to see more evidence, including proof the trial was well designed to diminish the role of chance and placebo.

In granting conditional approval to market the pill on Saturday, China’s drug authority, the National Medical Products Administration (NMPA), said the firm needed to hand over additional clinical data and further research to prove its effectiveness and safety.

“Considering the intensive and urgent demand for a therapy from Alzheimer's patients in our country, the NMPA allowed an initial market launch, on condition that additional materials be submitted within the next three months,” Geng Meiyu, the lead researcher, told state-run news agency Xinhua.

That cautious response has not slowed Green Valley’s marketing machine, which swung into action as company chairman Lü Songtao told a Sunday press conference that the first batch of Oligomannate capsules would begin mass production on Thursday, with the aim of being available across China by Dec. 29.

At the same event, Shanghai’s city government backed the drug and flagged construction of a factory in Pudong New Area capable of supplying 2 million patients. “We will fully support pushing (the new drug) with our policymaking,” said Shanghai Vice Mayor Wu Qing.

The enthusiasm is unsurprising. An estimated 30 to 35 million people around the world suffer from Alzheimer’s, a debilitating condition for which no cure exists. Only a handful of drugs are available to manage the symptoms — which include memory loss and can progress to an inability to speak or move — and the last was approved in 2003.

But despite all of this momentum and support from authorities, experts say the body of evidence so far underpinning Oligomannate would be unlikely to see it hit the market elsewhere.

According to the drug developers, it improves cognitive function in patients with mild-to-moderate Alzheimer’s by acting on their gut bacteria in a way that reduces inflammation in the brain. The model was demonstrated in mouse studies, but has not been demonstrated in humans.

That’s a problem, explains neuroscientist professor Bryce Vissel of the University of Technology, Sydney, simply because mice are very different from people. While the focus on inflammation and neurodegenerative disease “accords well” with other emerging research in the field, mouse trials do not automatically translate into human outcomes, Vissel told Caixin.

The professor, who specializes in neurodegenerative diseases like Alzheimer’s and Parkinson’s, said there was very little hard data available on which to judge Oligomannate, given the main human trial remains unpublished. He said based on what was known publicly, that trial seemed “fairly short” at 36 weeks and “relatively smaller” than what would be expected for a drug of this kind, particularly given the variability of Alzheimer’s disease. Larger international trials were needed, he said.

“My hope is that (Oligomannate) will hold up,” Vissel said. “Most of us out in the world of scientific research are extremely anxious to see (good) outcomes for Alzheimer’s patients, it’s been a very long and hard road.”

There’s an additional question mark over the company itself. In 2002, an investigation by the Southern Weekly found Green Valley had promoted dubious cancer treatments. Regulators took action against the firm three years later.

Caixin’s attempts to reach Green Valley’s chairman Lü by phone for comment on Thursday were unsuccessful.

Alzheimer’s is a confounding disease and various other drugs have failed to hold up to tougher scrutiny brought by more advanced stages of testing. Johnson & Johnson, Merck, and Pfizer have all abandoned projects in recent years.

Some in China have questioned what is known of the study design, saying subtle improvements of the type described among Alzheimer’s patients measured by cognitive tests may not be clinically meaningful.

Vissel agrees. “There’s lots of ways that the results could occur for the wrong reason. Without solid analysis and data, and understanding how the tests were done and the objectives — given memory tests are so subjective — it’s very hard to understand what happened here.”

“We’re still cautiously optimistic,” says Rebecca Edelmayer, director of scientific engagement at the Chicago-based Alzheimer’s Association, told Science. But, she added, “I think we need to really understand for sure what kinds of changes are occurring through a medicine like this and how they actually relate to a disease process.”