By Flynn Murphy and Lu Zhenhua 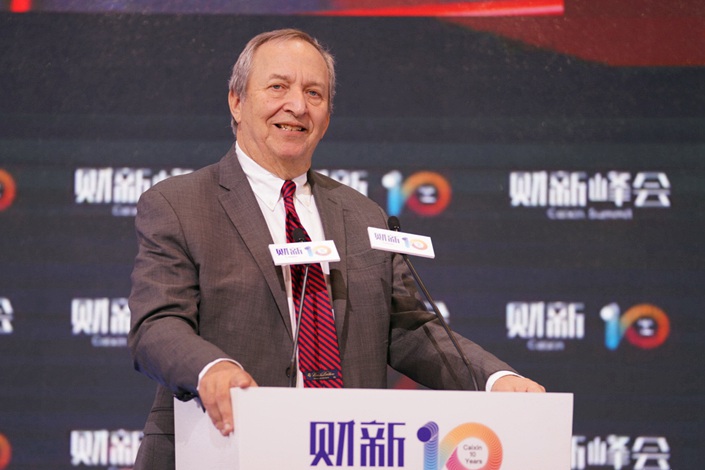 China and the United States should pursue mutual “strategic reassurance” and each should allow the other to achieve their goals in their own way, instead of trying to bring each other down, former U.S. Treasury Secretary Lawrence Summers told an annual Caixin Summit on Saturday.

Summers further said the nations could address their trade disputes in a multilateral framework that would serve both countries' interests, rather than having the U.S. as “both prosecutor and judge.”

“We have tendencies in both countries that are pulling us apart in dangerous ways,” Summers said. “(They) run the risk of profound losses of opportunity and even of conflict on both sides.”

Summers’ comments come as the world’s two largest economies struggle to deliver a preliminary deal in a trade war that has dragged on for nearly 18 months, and amid fears in Beijing that the U.S. is pursuing a strategy of containment that echoes its approach to the now-defunct Soviet Union.

In a wide-ranging speech that touched on the Chinese government’s cyber policies and “military adventurism,” and U.S. “hypocrisy” on industrial policy, Summers called for both nations to provide “strategic reassurance” to each other and focus on the needs of their own people. He also called on them to focus on bigger transformative issues like climate change and artificial intelligence.

China and the U.S. may not find “affection” but must “find mutual respect,” Summers said. The U.S. needs to be clear that “it is not our objective to prevent China from achieving its greatness on its own terms, and in its own way, as long as we too are permitted to pursue our aspirations in our own way.”

In turn, he called on China to demonstrate that its goal isn’t to bring the U.S. down, nor to cause it to no longer have a global role. Rather, he said, China should show it aims “to compete on a favorable basis in settings where you have grown up and are in a position to vie for leadership. And to recognize that with achievement comes a leveling of the playing field.”

Summers said viewing the ongoing trade war as the result of the most recent U.S. presidential election was a “very serious mistake.” It won’t go away, regardless of who wins the presidency in 2020, he said.

“For reasons valid and invalid, there is a new phase of truculence coming from the United States. And that is not going to correct itself soon or automatically,” he said.

Summers said he did expect the two nations to sign a partial trade deal soon, despite U.S. President Donald Trump sowing doubts overnight about the mooted tariff reductions that would underpin it.

But even that would be unlikely to significantly deescalate tensions, he said. “As long as there are issues unresolved there will still be substantial uncertainty about threats that could be issued, and conflicts that could play out,” he told Caixin after his speech.

“I don’t think it will be a hugely important or consequential agreement.”

Summers, who is an advisor to the Caixin Public Confidence Committee, compared the current issues to tensions between the U.S. and Japan in the 1980s and early 1990s. “Those trade frictions eased… (because) the Japanese economy found itself in such profound difficulty.”

But China was unlikely to wind up in a similar state, he said. “Since that’s certainly not something to be expected, I’m not sure we have great examples of the successful resolutions of trade frictions to try to build on.”

Summers said an “extraordinarily high rate of savings” was at the root of many of China’s economic woes, slowing demand and growth, and flowing into inefficient investment as well as holding the potential to create “substantial trade frictions as those savings are exported.”

As for whether the U.S. president’s shifting positions were interfering with the prospects of a trade deal, Summers told Caixin they could all be part of the act. Unpredictability can be a source of leverage, he said, but can also erode trust. “There may be a tactical element, or there may not be. I don’t think anyone knows for sure… If it is a strategy, it’s been taken much too far.”