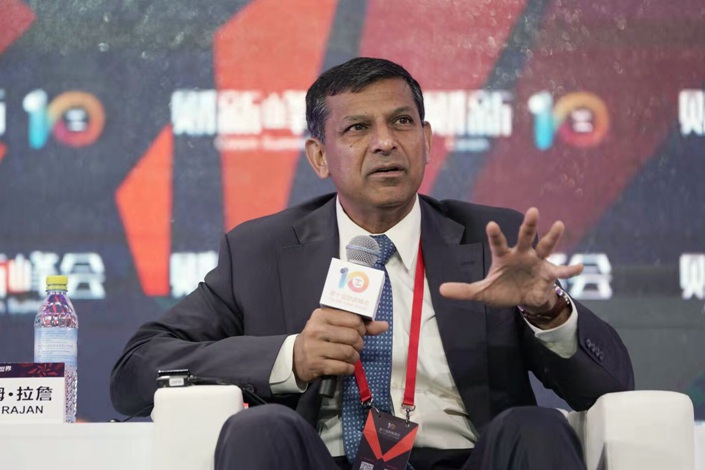 Raghuram Rajan, a former governor of the Reserve Bank of India, speaks at the Caixin Summit in Beijing on Friday. Photo: Caixin

Despite recent efforts to cool trade war tensions, Beijing and Washington are not likely to reach a complete deal within a year, former head of India’s central bank Raghuram Rajan said.

“In the last few days (there were) some discussions of moving down the tariffs on both sides in the U.S. and China, but it’s not over yet,” Raghuram Rajan, a former governor of the Reserve Bank of India, said at the 10th Caixin Summit in Beijing on Friday. “The chances of a comprehensive deal are really quite small, given the political environment.”

Rajan, now a professor at the University of Chicago Booth School of Business, said a comprehensive deal is necessary to give companies the confidence they need to make international investments. However, he said it is not likely to emerge “for the next year or so” and may even require a new administration in the U.S.

His remarks came a day after China’s commerce ministry announced that Chinese and American negotiators had agreed to roll back tariffs on each other’s goods in phases as they work toward a deal. On Saturday however, U.S. President Donald Trump cast doubt on this prospect, saying that he hadn’t “agreed to anything.”

Rajan said reaching an understanding will be difficult as the two countries are in a struggle for supremacy. “At some level, China is unlikely to accept a secondary position going forward. And the United States is reluctant to give China parity at this point.”

Rajan said that the overall chance of the current trade dispute triggering a global recession is small.

A typical financial crisis is usually triggered by sudden monetary tightening policies to curb the overly-high leverage in the financial sector. But currently global central banks are generally not taking such tightening monetary policies, he said.

However amid the current loose monetary environment, risks and leverage are building, Rajan said, adding that “when the recession actually comes, it will be a deeper recession.”

The next global recession could put 40% of corporate debt at risk, even if the crisis is just half the size of the 2008 crash, Rajan said, citing analysis from the International Monetary Fund.