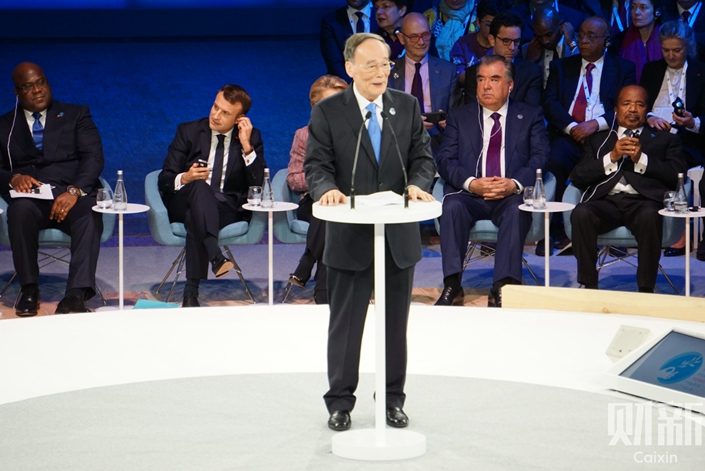 Vice President Wang Qishan on Tuesday took a veiled swipe at the United States’ unilateral protectionism, calling for a new type of international relations based on mutual respect and fairness.

Speaking at the annual Paris Peace Forum on global governance and multilateralism in the French capital, Wang said that “economic globalization is the historical trend, while currently, unilateralism, protectionism and populism are spreading.”

With French President Emmanuel Macron and the incoming European Commission President Ursula von der Leyen in attendance, Wang said that “no one can manage alone” the global challenges of uncertainty.

Wang warned that “emotion, rather than rational thinking and action, will not be helpful in solving problems.” He called on world leaders to “uphold multilateralism” and build “a new type of international relations” based on mutual respect, fairness and justice, and mutual benefit.

Wang’s comments came after Macron visited Shanghai and Beijing last week, a trip during which the two countries signed $15 billion worth of commercial contracts on aeronautics, energy and agriculture.

During a meeting at the Great Hall of the People in Beijing on Wednesday, President Xi Jinping and his French counterpart also pledged to uphold free trade and multilateralism at a time when both China and France are experiencing rising trade tensions with the United States.

China and the U.S. are struggling to deliver a phase one trade deal after about 18 months of a tit-for-tat trade war between the world’s two largest economies. Meanwhile, the U.S. is still threatening to impose punitive tariffs on European cars.

The U.S. has also been trying to persuade its European partners to ban Chinese telecom giant Huawei from being a supplier for the continent’s advanced 5G networks, because of Washington’s concerns that it could be used as a vehicle for Chinese spying.

“We [China and France] sent a strong message to the world that we are safeguarding multilateralism and free trade, as well as building an open world economy,” Xi said, according to a transcript of the meeting released by the Chinese foreign ministry.

“I am willing to work with you to take a future-oriented and people-oriented step to embrace the world, further elevate China-France comprehensive strategic partnership, and keep the partnership at the forefront of major-country relations,” Xi said.

On Monday at the same forum, U.N. Secretary-General António Guterres also said that the multilateralism should “adapt to the challenges of today and tomorrow, and make the U.N. more effective and agile.”

Multilateralism, he said, must be networked, and close to the people, working hand-in-hand with regional organizations, but also with international financial institutions, development banks and specialized agencies.

“We must do all we can to preserve a global system that respects international law, a multipolar world, with solid multilateral institutions,” he said.