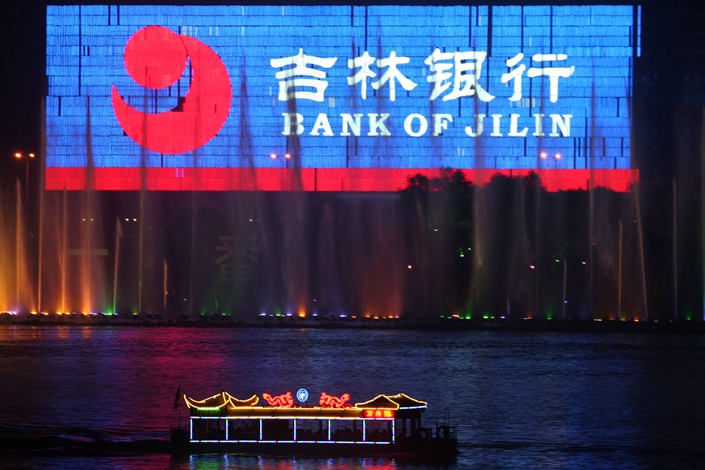 Chen Yulong, president of the bank, officially took over as chairman on Tuesday. Photo: VCG

Bank of Jilin Co. Ltd., a struggling small lender based in China’s northeastern Jilin province, has welcomed its new chairman just one day after the province’s anti-graft watchdog announced that its former chairman had been removed from his posts due to an investigation.

This is not the first time Bank of Jilin has had a run-in with the law. The lender has been penalized by regulators several times since 2018. Recent violations include faking transfers of credit assets, inflating deposit and loan figures, illegally issuing loans to cover for nonperforming loans, and inadequate internal controls.

Zhang Baoxiang, a former chairman of the bank, stepped down from his posts this month. Jilin’s provincial graft buster said in a Monday statement (link in Chinese) that Zhang is suspected of “serious violations of (Communist Party) discipline and law” — a euphemism for corruption.

Chen Yulong, president of the bank, officially took over as chairman on Tuesday on approval of the local banking regulator, the bank announced (link in Chinese).

Zhang, 55, spent most of his career working in banks and government bodies in Jilin. In the 1990s, he worked at the industry and commerce bureau of Changchun, the provincial capital. In 2000, Zhang moved to a state-owned local commercial lender, the predecessor of Bank of Jilin, and two years later was appointed chairman and president of the lender. In 2006, he returned to the public sector and served as a district chief in Changchun. He re-entered the business world in 2014, when he was appointed party chief and chairman of Bank of Jilin.

Personnel shifts are not the only thing Bank of Jilin has to worry about. The lender has struggled to make ends meet this year, and fallen close to the minimum capital adequacy ratios set by regulators. In the first half of this year, its net profits shrank by nearly 50% to 784.9 million yuan ($111.6 million), according to its 2019 interim report (link in Chinese). The bank’s nonperforming loan ratio stood at 2.86% at the end of June, up slightly from the end of 2018.

Currently, the bank is looking for more capital and has won approval (link in Chinese) for a private placement from the country’s securities watchdog.