By Zhou Meilin and Flynn Murphy 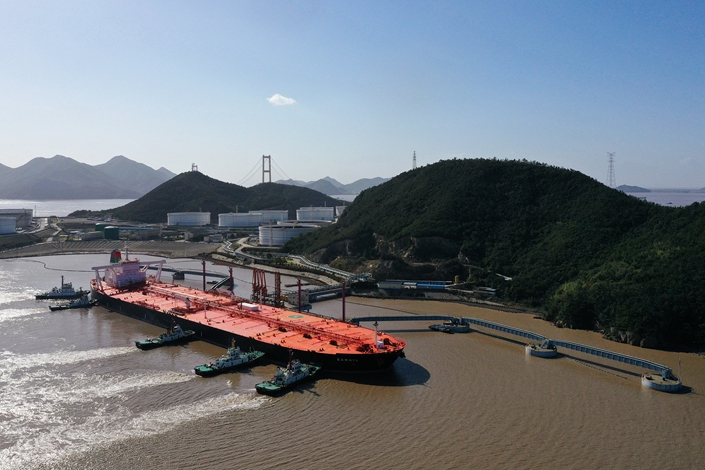 China’s thirst for Saudi Arabian oil continues to grow on the back of massive refinery joint ventures, and the nation is also drawing more crude from Russia, as imports from the U.S., Iran and Venezuela dwindle, fresh Chinese customs data for the year to November show.

The world’s largest crude oil importer brought in 414.6 million tons from January to October, a year-on-year increase of 10.5%, including 45.51 million tons last month. Imports from Saudi Arabia spiked by more than half for the period.

The figures, released by China’s General Administration of Customs on Monday, show the impact of Saudi Arabia’s dramatic shift into downstream business, as its state oil giant Saudi Aramco prepares to go public, as well as the effects of U.S. sanctions on imports from nations like Iran and Venezuela.

Imports from Venezuela fell to zero in October. Meanwhile Saudi Arabia overtook Russia as China’s largest source of crude for the past five straight months, bringing in 8.41 million tons in October — breaking the 8-million-ton mark for the first time — or about 1.98 million barrels per day.

Chinese imports of crude oil from Venezuela fell 20% year-on-year in the first 10 months to 11.41 million tons, mainly due to a decline in domestic production. The troubled nation’s oil industry has been hit hard by U.S. sanctions, including a presidential order freezing all Venezuelan government property and property interests in the U.S.

China imported 68.12 million tons of Saudi crude oil, a year-on-year increase of 58%, between January and October, as the kingdom knocked Russia out of the No. 1 spot.

That huge spike was helped by a series of Sino-Saudi joint ventures in petroleum refining, storage and sales, including two new privately-owned refinery and petrochemical projects. One of those is Hengli Petrochemical in Dalian, Northeast China’s Liaoning province, a $10 billion tie-up that Aramco previously pledged to supply with around 20 million tons of crude oil a year.

After a series of false starts, Aramco announced on Nov. 17 that it would sell a stake of 1.5% or 3 billion shares in an upcoming IPO. It set a price range that would see the world’s most profitable company raise around $25 billion from the issue, putting its value at $1.7 trillion, as the kingdom tries to raise cash to wean itself of its dependence on oil revenue. The state oil giant has been aggressively adding downstream business in recent years including by investing in a number of large refineries in China.

Meanwhile a 5% tariff imposed by China on U.S. crude oil from Sept. 1 amid trade war tensions has helped cut China’s imports of U.S. crude by half this year. China imported only 520,000 tons of U.S. crude oil in September, far lower than the more than 1 million tons in the previous two months. But customs data show the sum recovered significantly to 910,000 tons in October.

China has tapped European crude suppliers to make up the shortfall in U.S. light, low-sulfur crude oil. In the first 10 months of this year, China imported 10.44 million tons of crude oil from the U.K., an 80% increase year on year.

Last year, China imported 462 million tons of crude oil, about 1.2 times that of the United States, and it remains the main market for the world’s major oil exporters. In 2018, China’s top five sources were Russia, Saudi Arabia, Angola, Iraq, and Oman, which together accounted for 55% of total imports.