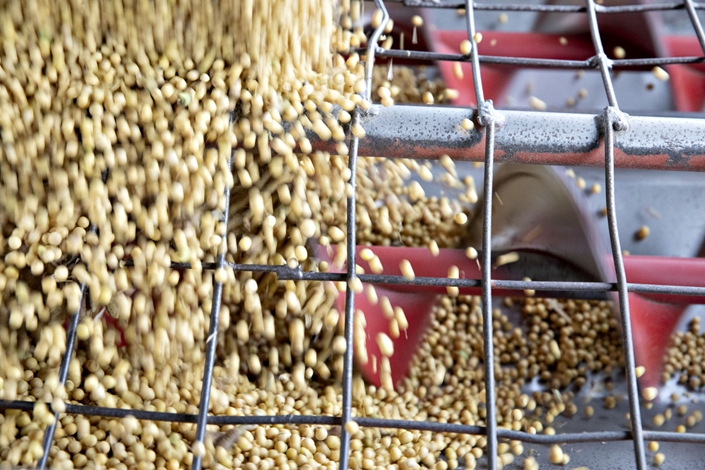 Soybeans are unloaded from a semi truck at a farm in Wyanet, Illinois, on Oct. 19. Photo: Bloomberg

(Bloomberg) — American soybeans that were once stranded on ships along China’s coast are coming ashore again just as U.S. President Donald Trump declares the two nations are in the final throes of a trade agreement.

While Beijing has agreed to waive a 30% retaliatory tariff on imports of U.S. beans, buyers still have to pay a deposit before seeking a refund from the government.

Many have been struggling to stump up the cash, meaning they couldn’t unload the shipments, according to people familiar with the matter. That caused a logjam at Chinese ports of as much as 2 million tons of soybeans from the U.S. as well as shipments from other countries that were caught up in the congestion.

Now, China’s customs authorities are letting importers use a letter of guarantee from banks instead of cash to pay the deposit, and again, according to the people, who asked not to be identified because they’re not authorized to speak publicly.

China’s Ministry of Commerce and General Administration of Customs didn’t immediately respond to faxes seeking comment on the enforcement mechanism and port delays.

As a key buyer of American soybeans, Beijing has been using purchases of the commodity as leverage in negotiations.