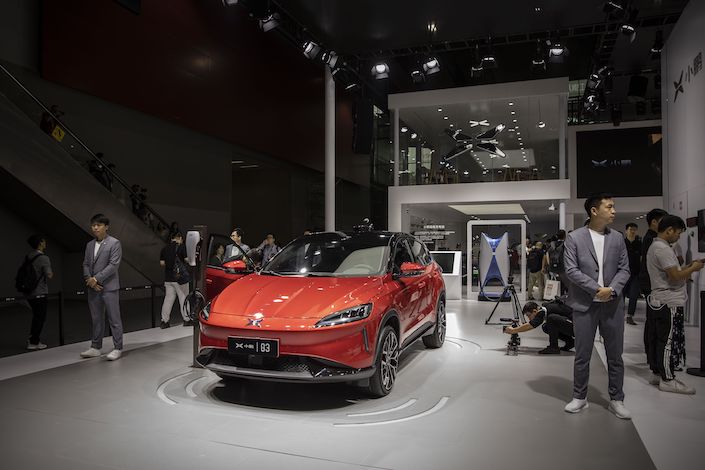 (Bloomberg) — Some of China’s wealthiest tycoons steered billions of dollars into electric-car companies to fuel the country’s dreams of becoming a leader in the field. Now a reckoning may be looming as car sales slow and the government reduces subsidies for the nascent industry.

That leaves the flagship companies of Jack Ma, Pony Ma, Hui Ka Yan and Robin Li facing an increasingly steep path to profitability on their bets that electric vehicles can be smartphones-on-wheels connecting passengers to other businesses. Their capital, along with dozens of startups that raised $18 billion, helped inflate an electric bubble that now looks to be in danger of popping.

China’s car market is experiencing a prolonged sales slump, prompting EV makers to slash earnings forecasts. With China considering further cuts to the subsidies for consumer purchases and force automakers to compete on their own, a shakeout is looming that not even the tycoons’ support may be able to prevent, said Rachel Miu, an analyst with DBS Group Holdings Ltd. in Hong Kong.

“For the new kids on the block in the EV space, it’s a steep uphill climb,” she said.

Here’s what China’s richest people have to show for their companies’ EV investments:

Jack Ma stepped down as chairman of Alibaba Group Holding Ltd. in September after amassing a $40 billion-plus fortune, but China’s richest man retains his board seat — and influence — at the e-commerce emporium he created. Alibaba has participated in several funding rounds for Guangzhou Xiaopeng Motors Technology Co., or Xpeng Motors, including one in 2018 that raised 2.2 billion yuan ($313 million) for the carmaker co-founded by former Alibaba executive He Xiaopeng.

Xpeng launched its first vehicle, the five-seat G3 SUV, last year and has sold 11,940 vehicles so far this year, according to data compiled by Bloomberg.

The company, founded in 2014, also is teaming up with more-established automakers. A factory built with Haima Automobile Co. can produce 150,000 EVs annually. Another should soon begin assembling the P7 coupe, scheduled to begin deliveries next year.

The journey hasn’t been without controversy, though, as some engineers bound for Xpeng stand accused of stealing from their ex-employers in the U.S. In March, Tesla Inc. sued a former engineer, alleging he uploaded files, directories and copies of source code to his personal cloud storage account before resigning. Also, a former Apple Inc. engineer was indicted last year for allegedly pilfering self-driving car secrets on his way to an Xpeng job. His trial is upcoming.

“We are very adamant that we pursue our own R&D,” President Brian Gu said. “Copyright is very important to us.”

Xiaomi Corp., the consumer-electronics company, participated in another $400 million fundraising round, the automaker said Nov. 13.

Pony Ma’s Tencent Holdings Ltd., whose WeChat messaging app helped make him China’s second-richest person, led a $1 billion investment round in NIO Inc. in 2017. With more than 26,000 vehicles sold, NIO is one of the few Chinese startups making multiple models, and it beat rivals with an initial public offering in New York last year.

But losses piled up with the overall sales slump and as the company, which has been described as “China’s Tesla,” plowed money into marketing and real estate. It sponsored a Bruno Mars concert and opened luxury clubs for NIO owners that feature showrooms, coffee bars and performance spaces. By August the company had opened 19 NIO Houses over 22 months, and combined rental expenses were equivalent to 6.3% of revenue during the 12 months ended March, according to Bloomberg Intelligence.

“NIO chooses the direct sales mode and pays great attention to user experience,” the company said. It doesn’t plan to close its existing clubs — or open new ones.

NIO lost $2.8 billion in the 12 months ended June on revenue of $1.2 billion, and its shares have plunged this year. The Shanghai-based company cut about 20% of its workforce through September, when Tencent injected $100 million more.

“Our sales have been under pressure since the subsidies went down,” NIO Chief Executive Officer William Li said. “It has come to a new era that one can only win customers with quality products and services.”

One of the more startling entrants in the EV industry is property developer China Evergrande Group, which declared it wanted to be the world’s biggest manufacturer within three to five years. That means surpassing Tesla, which just opened a factory in Shanghai.

Between September 2018 and June 2019, Evergrande invested more than $3.8 billion in EV-related companies, according to Bloomberg Intelligence. It is to start producing its Hengchi brand next year.

Evergrande, which wants to open 10 production bases, plans to spend 45 billion yuan on new-energy vehicles between 2019 and 2021. On Nov. 10, a unit announced it would spend almost $3 billion to boost its stake in National Electric Vehicle Sweden AB to 82% from 68%.

Billionaire chairman and founder Hui Ka Yan, who’s diversifying into businesses such as soccer and health care, acknowledged there isn’t much overlap between Evergrande’s real-estate business and its EV ambitions.

“We don’t have any talent, technology, experience or production base in manufacturing cars,” Hui said. “How can we compete with the century-old automakers in the world?”

His answer: by opening Evergrande’s wallet.

“Whatever core technology and company we can buy, we will buy,” he said.

Yet Hui’s whatever-it-takes strategy may take a toll on Evergrande because of the cash-burning nature of NEV investments. The company’s forecast of spending 45 billion yuan is probably an underestimate, and that may exacerbate its cash crunch, according to BI.

“This could crimp its home-sales margin, given an urgency to sustain price cuts to boost cash collection from sales,” analyst Kristy Hung said in a Nov. 22 report.

WM rolled out an electric SUV last year and has delivered more than 19,000 vehicles, Chief Strategy Officer Rupert Mitchell said. So far this year, WM sold 14,273 of its battery-powered SUVs, according to data compiled by Bloomberg. That puts WM behind market leader BYD Co.— backed by Warren Buffett — and NIO, but ahead of Xpeng. WM launched a second SUV model on Nov. 22.

“We are not moonlighters from the technology industry that are having a crack at mass-market automotive,” he said.

WM is producing vehicles at fully owned factories, which helps maintain quality control, Mitchell said. The company, which is opening a second factory next year that can make 150,000 vehicles annually, wants to raise an additional $1 billion, Mitchell said.