Blackstone CEO Discusses How to Bring Beijing and Washington Together

By Wang Liwei and Matthew Walsh 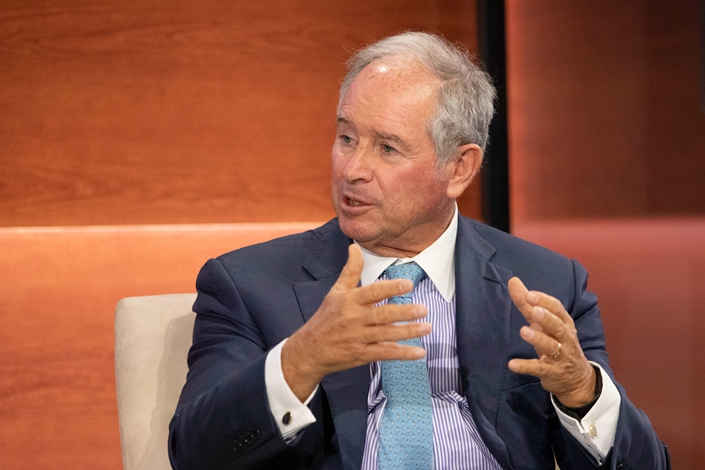 More than a year after trade tensions deepened between the United States and China, the will-they-or-won’t-they story of a phase one deal between the world’s two largest economies remains unresolved. For Stephen Schwarzman, the billionaire chairman and CEO of global private equity firm Blackstone, deeper understanding and trust between the two countries hold the key to a more positive relationship.

“I am a strong believer that cooperative relationships between countries are in the best interests of global peace and prosperity. This is especially true for China and the U.S., which together comprise about 40% of the world economy,” Schwarzman told Caixin in a written interview last month. “A constructive dialogue between China and the U.S. is critical to achieving a win-win solution that benefits long-term global economic growth amid China’s growing significance in the world.”

Schwarzman understands the intricacies of the trade talks better than most. In his new book “What It Takes: Lessons in the Pursuit of Excellence,” the 72-year-old describes how he helped broker part of last year’s U.S.-Mexico-Canada Agreement. Now, as Beijing and Washington target a trade deal of their own, Schwarzman’s controversial friendship with U.S. President Donald Trump, his China-focused business and philanthropic interests, and his close contact with high-ranking Chinese officials make him a rare presence in the trade dispute: someone trusted by both sides for his ability to see things from their perspectives.

Schwarzman attributes that trust to his appreciation of China’s complexity and its common interests with the United States. “China’s business environment, political structure, history, and culture are full of intricacies that many in the U.S. and elsewhere do not fully understand,” he said. “As I’ve expanded both my business and philanthropic work in China, I’ve realized the Chinese, just like Americans, are working hard to encourage prosperity in their country and build better lives for future generations.”

In “What It Takes,” Schwarzman describes several occasions in the last few years when he helped facilitate communication between China and the U.S. In January 2017, he conveyed then-President-elect Trump’s views on China to Chinese President Xi Jinping at the World Economic Forum in Davos, Switzerland. And last year, Schwarzman met with Chinese vice premier and chief trade negotiator Liu He at least twice. During their initial rendezvous, Liu signaled his willingness to pursue an open dialogue with the U.S. After initial talks collapsed in June, a later conversation convinced Schwarzman that there might be an opening to bring both countries back to the negotiating table.

Then, last October, amid a freeze in Sino-U.S. relations, Schwarzman was able to tell Chinese Vice President Wang Qishan during an informal 20-minute conversation in Beijing that Trump and Xi might have a chance to meet at the G20 summit in Argentina the following month. The two leaders held a dinner meeting at the summit, which resulted in Trump delaying for 90 days long-threatened 25% tariffs on most Chinese imports in order to allow both sides to negotiate over their trade disputes.

Perhaps Schwarzman’s best-known China-focused philanthropic project is the $100 million he pledged in 2013 to fund a scholarship at Beijing’s prestigious Tsinghua University. The highly selective Schwarzman Scholars program aims to foster young leaders by giving them immersive academic, professional and cultural experiences with both Chinese and Western mentors. “I believe this framework positions our students well to grow into leaders of consequences who can cooperate through friendship and mutual understanding across cultures,” he said.

The program, which has been endorsed by both Xi and former U.S. President Barack Obama, remains a cornerstone of Schwarzman’s China-based interests. “I believe that now more than ever our focus must be on fostering cross-cultural relations between China and other nations,” Schwarzman said. “We must continue to nurture a deeper level of understanding and trust.”

Relations between Washington and Beijing may be flagging, but Blackstone’s ties to China continue to deepen. The company has trained its eyes on sectors with rising growth in consumer spending, such as education, travel and leisure. Another focus is health care services catering to China’s graying population, Schwarzman said, pointing to Blackstone’s existing investments in YiChang HEC ChangJiang Pharmaceutical Co. Ltd. — the country’s largest flu medicine provider — and orthopedic implants-maker Xinrong Best Medical Instrument Co. Ltd.

Despite a slowdown in the technology sector, Schwarzman is convinced of the need to stay abreast of developments in the fast-changing industry. Blackstone has tweaked its risk evaluation process to accommodate tech-based disruption to investment opportunities, he said. “Tech and artificial intelligence (AI) are impacting all industries and in many cases challenging traditional business models. I have seen firsthand the impact of rapid technological change and how quickly it can disrupt an otherwise healthy business or industry,” he said.