HNA Group Sells Another Airline to Pay Down Debts 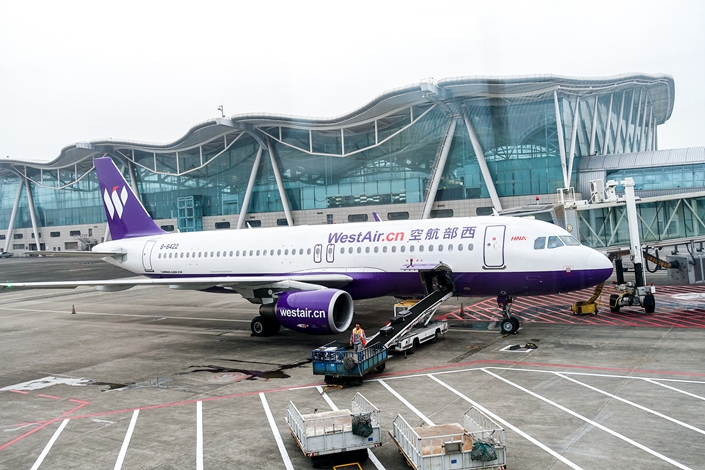 A West Air flight sits at an airport in Chongqing on July 12. Photo: VCG

HNA Group will sell its controlling stake in low-cost carrier West Air to a Chongqing-government backed equity firm, as the company scrambles to pay down its massive debts.

HNA signed a deal Monday to restructure the equity of the debt-saddled China West Air Co. Ltd., handing minority stakeholder Chongqing Yufu Assets Management Group Co. Ltd. and its designates shares that could boost its stake in the carrier from a current 14% to as much as 70%. HNA had previously held 84% of the airline.

It’s just the latest affiliate airline HNA Group has disposed of in a bid to pull itself out of the doldrums, following Beijing Capital Airlines, Urumqi Air and Beibu Gulf Airlines.

The transfer will “greatly strengthen West Air’s independence” from Hainan Airlines and give the Chongqing government more control over it, said a senior Chinese civil aviation industry insider who asked not to be named citing sensitivities around HNA Group.

HNA established West Air in 2006 and it began operating flights in 2007. It has two bases, one in the southwestern city of Chongqing and another in the central city of Zhengzhou. It flies to 52 cities in China as well as a few in Southeast Asia, according to the airline’s website.

HNA said it will remain a minority stakeholder and run West Air’s business operations. It said Yufu’s controlling stake would help eliminate “liquidity risk” in the western Chinese aviation industry and help West Air to expand. With local resources and HNA’s operations and management experience, West Air could grow into a base airline adding 200 international and domestic routes within five years, the company said.

But it’s not the first time HNA has trumpeted its grand designs for the airline. HNA reorganized it for the first time in 2011, bringing in Chongqing Yufu Group to jointly establish Chongqing Western Airlines Holding Co. Ltd.

According to an agreement at that time, West Air was to have 40 aircraft by 2015, and would expand routes from Chongqing to Hong Kong, Macao and Taiwan, Southeast Asia, Japan and South Korea. It was to launch an all-cargo freight business and build an air cargo network focused on cargo flights and supplemented by space in the luggage compartments of passenger aircraft, covering the whole country and eventually spanning the world. And it was to establish a corporate jet company by the end of 2012, complete with terminals, hangars and other supporting facilities.

The reality has been very different. West Air ultimately abandoned freight operations and transformed itself into a local low-cost airline. Plans for a corporate jet company dissolved. Financial information shows that as of the first half of this year, the company had 35 aircraft and around a 2% share of the China market.

The aviation industry source said the sale of West Air was different from those of Beijing Capital Airlines, Urumqi Air and Beibu Gulf Airlines because the previous agreements were signed as frameworks — “more a memorandum of understanding.”

“This time a transfer agreement was signed, so there will be substantial transactions,” he said.

He said West Air was the first domestic low-cost airline transformed from a full service carrier in China, and said that the transformation should be seen as a success, pointing out it has been profitable over the past few years.

West Air’s revenue for the first half of 2019 was 2.77 billion yuan, an increase of 9.8% year-on-year, while net profit decreased 18% to 125 million yuan. However, the company had total liabilities of 7.4 billion yuan, including short-term loans of about 2.7 billion, while it had about 897 million yuan in cash, creating enormous debt pressure.