In Depth: How the Queen of Gree Won, Again 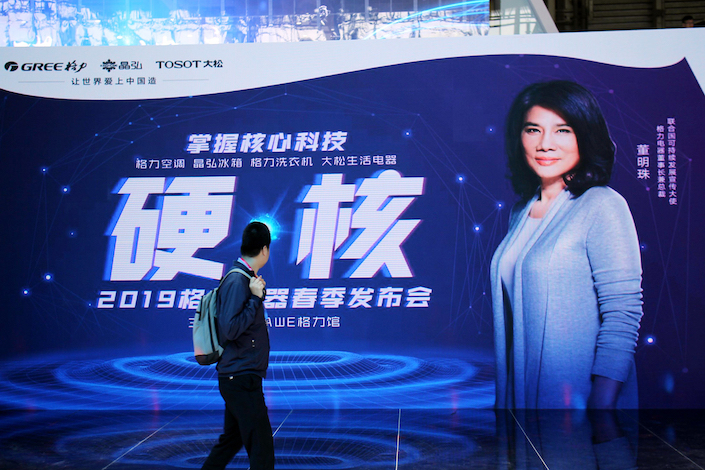 It was a warm autumn afternoon Nov. 28 in China’s southern city Guangzhou when Dong Mingzhu, one of the country’s best-known and toughest businesswomen, appeared at a home appliance industry conference wearing a pink dress and a white vest.

In a keynote speech to the conference, the 65-year-old chairwoman of China’s biggest maker of air conditioners talked about fighting. She referred to a fight between Gree Electric Appliances Inc. with smaller rival Aux Group Co. Ltd. Five months ago, in a social media post, Gree accused Aux of selling air conditioners that didn’t meet energy-efficiency standards, which has since led to regulatory investigations.

“You all saw our fight with Aux,” Dong said. “Keeping silence on inferior products is disloyalty to the market, and Gree of course should come out to fight.” She added: “I believe companies cannot grow without fighting.”

At the time, Dong was in another, much more significant fight.

In late October, after a bidding process lasting more than six months that attracted 25 or so companies and consortia, Gree’s state-owned controlling shareholder picked a private equity firm as the winning buyer of a 15% stake in the company. During the process, the market’s focus on the high-profile sale was who would become the new master of the home appliance giant and where it would leave Dong, the Queen of Gree.

When the final agreement was announced Dec. 2, the market was stunned to learn that buyer Zhuhai Mingjun Investment Partnership, a private equity fund backed by Hillhouse Capital Group, spent nearly 40 billion yuan ($5.7 billion) to become Gree’s biggest shareholder but managed to secure only one board seat. Meanwhile, Dong and her management team became the actual decision makers at Gree through a series of complicated cooperation agreements, even though they hold a minor stake that’s a small fraction of Zhuhai Mingjun’s investment.

How Dong wins it all

It was an incredible victory to many. Negotiations on detailed terms of the transaction even stalled at the last minute as the buyer and management couldn’t agree on core issues such as equity arrangements and controlling rights. For Dong, who joined Gree in 1990 as a saleswoman, fought her way to the top and turned Gree into a company with a market value of $50 billion, too much was at stake.

As part of the final deal, Gree’s management team led by Dong signed a series of collaboration agreements with Zhuhai Mingjun to clarify equity arrangements and controlling rights in the company. In a 56-paged equity change report released publicly, each line shows the traces of a hard fight.

For Dong, the results couldn’t be better. Gree’s management will hold a stake in the general partner of Zhuhai Mingjun and a 2.4 billion yuan limited partner interest, making Dong and her team able to share profits as well as retain their decision-making rights in the company.

For Gree, the new ownership structure has effectively ensured the stability of current management and eliminated uncertainties of an outsider’s acquisition.

“This is a significant mixed-ownership reform case,” granting Gree the right to name its senior executives and making it completely free from government control, a senior Gree executive said.

After the transfer, the three current shareholders’ stakes reduce to 38% for Zhuhai Hillhouse, 11% for Pearl Brilliance and 10% for HH Mansion. Dong’s Gezhen will invest 4.3 million yuan to obtain a 41% stake in Zhuhai Yuxiu, becoming the largest shareholder. Dong owns nearly 95.5% of Gezhen, and 17 other Gree executives collectively own less than 5%.

The board of Zhuhai Yuxiu will consist of three members. Pearl Brilliance and Gezhen each has the right to nominate one director. Zhuhai Hillhouse and HH Mansion, together holding 49%, can nominate only one director. That makes Dong the winner in this arrangement because deciding many important matters, such as the nomination of directors to Gree’s board, requires the support of only two directors of Zhuhai Yuxiu.

After selling the 15% stake, Zhuhai Gree Group, which still holds a 3.2% stake in Gree, will retain one seat on Gree’s board, while Zhuhai Mingjun will inherit three nonindependent seats from it, a person close to Gree told Caixin.

According the arrangement in the equity transfer agreement, Zhuhai Hillhouse, Pearl Brilliance and Gezhen can each nominate one director to Gree’s board, but at least two of the candidates should get the nod from Gezhen, which means Dong together with Hebei Jinhai can control four seats on the board. Since the three independent directors are nominated by the board, Dong will very likely continue to dominate the board.

In addition to board control, Dong and her management team also get a clear guarantee for their financial interests. First, Gezhen gets 41% of Zhuhai Mingjun’s general partner returns. It also spent 2.4 billion yuan to become Zhuhai Mingjun’s limited partner, making it be able to share 11% of its investment returns.

The agreement also guarantees that Gree’s management and employees will receive a 4% incentive equity.

Why government wanted to sell

Why did the government wanted to let go of its cash cow?

The State-owned Assets Supervision and Administration Commission (SASAC) of Zhuhai, the local branch of the state assets regulator that controls Zhuhai Gree Group, initiated the share sale because there wasn’t much more it could do for Gree Electric, said Ye Dan, an official of the Zhuhai SASAC.

In an unusually blunt admission for a regulator, the local SUSAC acknowledged that it didn’t have the know-how to introduce market solutions to increase Gree Electric’s competitiveness.

Over the years, Zhuhai SASAC tried but failed to exercise influence over Gree’s management. That made selling its stake sensible, several people close to Gree said.

“The inefficiency in Gree’s decision-making process makes it difficult to adapt to market demand,” said Li Congshan, the head of Zhuhai SASAC. “Without a reform, it wouldn’t be long for Gree to decline. A reform may curb the decline.”

Dong clashed with Gree’s state-owned shareholder. She was abruptly removed from her position as chairwoman of the parent company in 2016. She publicly expressed her dissatisfaction with the Zhuhai government and the bureaucratic nature of China’s state-run corporate system.

“There is a structural issue with the internal ownership of state-owned companies, which have been strangled by ‘too many bosses,’” she said at a forum in April.

After Guo Yonghang became Zhuhai’s party chief in February 2018, he set out to make a mixed-ownership restructuring of Gree an exemplary case, people in the Zhuhai government told Caixin. In an event at Gree last year, Guo said he wished “a young Gree led by young Dong Mingzhu would continue to create glory.”

Guo was also believed to have played a key role in getting the Gree deal done. In November when the negotiations between Zhuhai Mingjun and Gree’s management were at a stalemate, Guo and Zhuhai Mayor Yao Yisheng paid a visit to Gree’s headquarters and met with Dong. At the meeting, Guo thanked Gree for its important contribution to the city over the years and pledged that the government would do its best to support the company to grow bigger and stronger, local media reported.

The negotiations sped up after the meeting, people close to the deal disclosed. Ten days later, an agreement was reached.

Gree dominates China’s air conditioner market with 35%, according to Euromonitor International, though its dominance has diminished over the past few years. Its market share is down from about 40% in 2013, reflecting competition from rivals Haier Group Corp. and Midea Group Co. Ltd.

When Dong was named Gree’s chairwoman the second time in 2012, the company had annual sales of 99.3 billion yuan, nearly 90% of which came from air conditioners. In 2018, the ratio was still nearly 80%. The company has been trying to diversify, but its attempts to do so have borne little fruit. In recent years, it has dabbled in mobile phones, automobiles and chip production, but without much success.

In contrast, Midea has a more balanced revenue stream, with 42% coming from air conditioners and 40% from consumer electronics. Midea’s new robotics and automation business grew by leaps and bounds after the company acquired German robot-maker Kuka AG in 2016 for more than $5 billion. The unit contributed 10% to total revenue last year.

Lack of diversity makes Gree vulnerable to the weakening of China’s air conditioner market. In the first nine months of 2019, Gree’s growth in revenue and profits slowed significantly.

Dong has set a goal of 250 billion yuan of sales for 2019. With sales of just 155 billion yuan in the first nine months, that goal might be hard to reach, a Gree dealer said.

Now, without “too many bosses” over her head, Dong may finally be able to implement her strategy to revamp the company.