In Depth: The State Wants Out of China’s Biggest Air-Conditioner Maker. Why Does Everyone Else Want In? 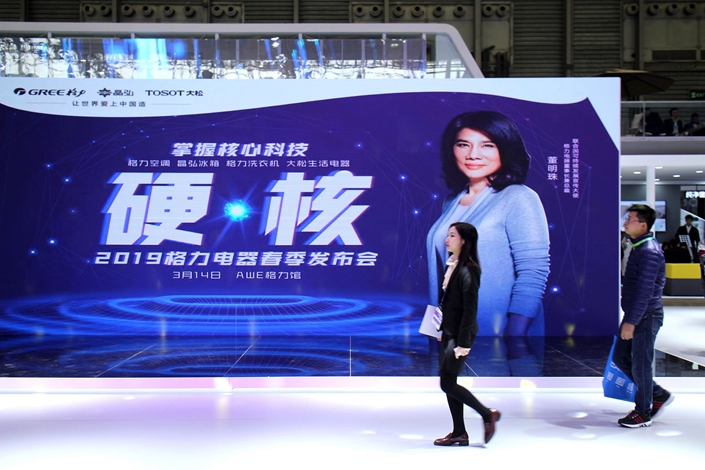 It looked like a public proclamation of love when over 20 investors gathered on May 22 at Gree Electric’s headquarters in Zhuhai, South China’s Guangdong province, to attend a briefing on the sale of a 15% stake in the company.

The winners of the upcoming sale will each control a significant share of one of the country’s highest profile home-appliance makers just as the state is paring back its holdings.

The briefing came after Zhuhai Gree Group Co. Ltd., which is controlled by the Zhuhai city government, told the Shenzhen Stock Exchange in April that it’s looking to divest part of its stake in Gree Electric Appliances Inc. of Zhuhai, China’s biggest maker of air conditioners. It is a deal “that could lead to a change of the Gree Electric’s ownership structure,” the statement said. The 15% stake will be sold for no less than the average price of the company’s stock over the past 30 trading days. At that price, the sale of a 15% stake would amount to more than 41 billion yuan ($5.93 billion).

If the deal goes through, it will dilute Gree Group’s control to 3.2%.

The stake sale has attracted at least 25 bidders. But no more than two will be shortlisted and they must act in concert, a person close to the Zhuhai government previously told Caixin. Priority will be given to domestic investors, but not speculators or rival appliance-makers.

Gree Electric also stands out because the government has gradually reduced its holdings in the company. The state-backed Gree Group’s stake in its Shenzhen-listed unit has fallen to 18.2% from a peak of 60% a decade ago.

Present at the May briefing was a representative from the Singaporean state investment firm Temasek Holdings Pte. Temasek, which manages more than S$300 billion ($219.63 billion) in assets, is very interested in contributing to China’s state-owned enterprise reform, said a person familiar with the matter.

Founded in 1991, Gree Electric ranked No. 260 on this year’s Forbes Global 2,000 list. It employs over 80,000 people and has 11 production bases around the world, including in Brazil and Pakistan, according to its website.

The company dominates China’s air conditioner market with a 35% share, according to Euromonitor International, though its dominance has diminished over the last few years. Its current market share is down from about 40% in 2013 due to growing competition from rivals Haier Group Corp. and Midea Group Co. Ltd.

Under these circumstances, it makes sense for Gree Electric to diversify, but its attempts to do so have borne little fruit. In recent years, it has dabbled in mobile phones, automobiles and chip production, but without much success.

Company Chairwoman Dong Mingzhu has set a 2023 sales target of 600 billion yuan, a 200% increase from the company’s revenue in 2018. To achieve that, Gree Electric urgently needs to find a second killer product, while speeding up its overseas expansions, industry analysts said.

The air conditioner business accounted for nearly 80% of Gree Electric’s total revenue in 2018. In contrast, Midea had a more balanced revenue stream, with 42% coming from air conditioners and 40% coming from consumer electronics. Midea’s new robotics and automation business grew by leaps and bounds after the company acquired German robot-maker Kuka AG in 2016 for more than $5 billion. This unit contributed 10% to total revenue last year.

Midea has also fared better overseas. Last year, the international market supplied 43% of its revenue, with those sales generating fat gross margins of 23.5% on average. In contrast, Gree Electric’s overseas revenue edged down to 11.2% from 12.5% in the same period, with an average gross margin of 13.3%.

Hopu is considering a joint bid with investment institution in Macao, Caixin reported in April, citing sources familiar with the matter.

The State-owned Assets Supervision and Administration Commission (SASAC) of Zhuhai, the local branch of the state assets regulator that controls Gree Group, initiated the share sale because there isn’t much more it can do for Gree Electric, said Ye Dan, an official from Zhuhai SASAC.

In an unusually blunt admission for a regulator, the local regulator acknowledged that it doesn’t have the know-how to introduce market solutions to increase Gree Electric’s competitiveness.

Zhuhai SASAC had commissioned a number of case studies about fallen global home appliance-makers due to strategic or operational missteps, according to one person familiar with the Zhuhai government.

The city’s government had determined that Gree Electric’s air conditioner business had hit the ceiling and its diversification moves had gone nowhere, the source said. If things continue as they have, Gree Electric will end up the subject of one of those case studies.

While the SASAC stake is up for sale, it won’t be the case of “the highest bidder takes all,” said Li Congshan, another Zhuhai SASAC official. What matters most is whether the buyer can bring high-end technological know-how to the table, Li told Caixin.

It’s understood that potential bidders have to submit a long-term development plan for Gree Electric, and agree to a lock-up period to hold their shares for a certain period of time.

Hillhouse Capital Group is one of the 25 interested investors. It is also one of Gree’s 10 largest stakeholders as it owns 0.72% of its shares. The Chinese investment firm maintains a close relationship with Gree’s management, and is keen to strengthen their partnership, according to a Hillhouse executive, who wanted to remain anonymous because he wasn’t authorized to speak to the media.

A Baidu representative was also present at the May 22 briefing. “Baidu wanted to get an initial assessment of the deal, and it doesn’t mind forming a joint bid with a partner,” said a source close to the search giant.

Will Dong be a buyer?

Many Chinese people associate Gree Electric with its chairwoman Dong. As the company’s product ambassador, her image pops up on company’s website and when users turn on Gree phones. The name of a vocational school sponsored by the company is “Gree Mingzhu.”

The 65-year-old started as a salesperson when she joined Gree Electric in 1990. She rose to the rank of assistant vice president of sales department in 1997. She now doubles as company’s president and chairperson.

Known as the “iron lady” partly due to her outspokenness, Dong was hailed as the most successful businesswomen in China by Forbes magazine in 2017.

Dong has publicly expressed her dissatisfaction with the Zhuhai government and the bureaucratic nature of China’s state-run corporate system. “There is a structural issue with the internal ownership of state-owned companies, which have been strangled by ‘too many bosses’,” she said at a recent forum.

There have been rumors that Dong may want to join in the bidding herself to amplify her control. She currently holds 0.74% of Gree Electric’s shares.

Dong didn’t reply to Caixin’s numerous requests for an interview.

According to Liang Jun, a research fellow at Guangdong Academy of Social Sciences, Dong is an industry veteran with a great deal of hands-on experience, making her the best candidate to helm Gree Electric going forward.

But some critics said the company needs a new captain to steer it off its current course, and into uncharted waters. The same source from SASAC Zhuhai said that the current management, which has long been dominated by Dong’s “one-woman show,” won’t be able to propel Gree Electric to new heights.