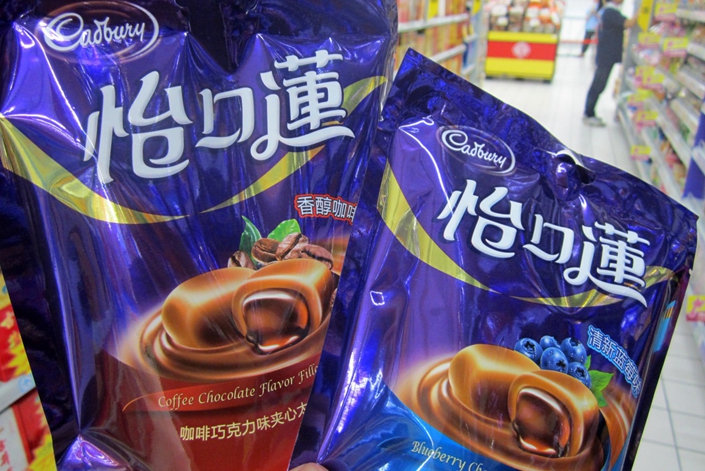 Cadbury chocolate on sale at a supermarket in East China's Jiangsu province on July 16.

A Chinese confectionary-maker has been ordered to hand over 2.43 million yuan ($347,196) in compensation to Cadbury UK Ltd. after a Beijing court found it had infringed on a trademark held by the 195-year-old chocolate brand.

Yikoulian (Xiamen) Food Co. Ltd. registered the trademark ‘怡口莲’ in 2012, using it on a range of popular crispy rice-based chocolate bars and other food items.

The mark, which translates roughly as “delicious lotus,” bears more than a passing similarity to Cadbury’s ‘怡口蓮’: it sounds identical when read out loud, but the Chinese brand uses a simplified Chinese character at the end, while Cadbury uses its traditional form.

The Yikoulian’s trademark was ruled invalid on Sept. 20, and the case wrapped up this week, according to a statement published by Beijing’s Haidian District People’s Court.

The court found in favor of Cadbury, which charged that Yikoulian had confused and misled buyers and damaged its reputation. It ordered the Chinese company to take a suite of measures, including ceasing production, sales and promotion of products with the counterfeit trademark, removing online ads and taking the trademark out of its company name.

It also ordered Yikoulian to pay damages and expenses of 2.43 million yuan to the U.K. giant.

The court cited the identical pronunciation and meaning as well as the overlap in distribution channels, customers and market in finding Yikoulian had engaged in unfair competition. Products from both companies were often sold side by side in supermarkets, it noted.

Founded in 2014 in East China’s Fujian province, Yikoulian had argued that its registered trademark had the legitimate right to conduct commercial activities before it was disqualified in September.

The presiding judge, who was not named, said in comments attached to the ruling said companies should to foster a good business environment, and use their initiative to create their own brands, rather than “piggybacking” on those of others.

It’s not the first time Cadbury has fought a trademark dispute in China. In 2010, the company sued Chinese fertilizer-maker Changsha Gaosheng Science And Technology Development Co. Ltd. after it tried to register the Chinese translation of Cadbury as a trademark for one of its products. A court at the time ruled in favor of Changsha Gaosheng, saying the different products and markets meant consumers would not mix them up.

Cadbury parent Mondelez International Inc. earlier this year lost on appeal a years-long effort to protect the brand's distinctive shade of purple, which it trademarked in the U.K. in 1995.