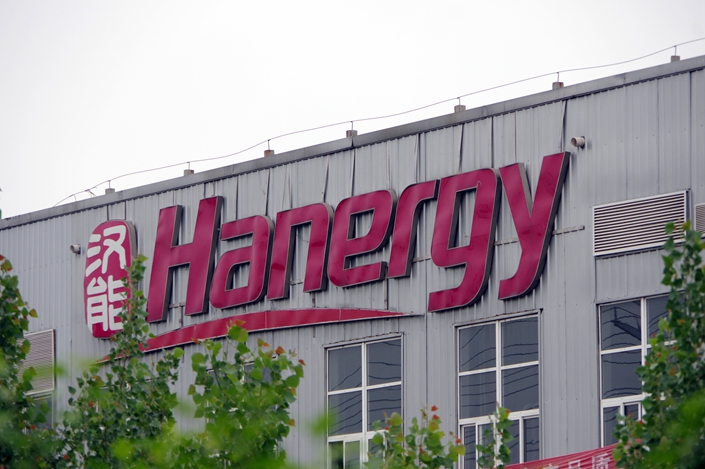 Hanergy has set up similar industry parks around China, often with local governments providing much of the funding for facilities that are heavily outfitted with Hanergy equipment.

Work on an industry park being co-developed by solar power specialist Hanergy Thin Film Power Group Ltd. in southwest China’s Guizhou province has slowed to a crawl, despite billions of yuan in local investment, due to the company’s failure to provide promised equipment.

Two years after inking the deal, the thin-film solar project in the provincial capital Guiyang has yet to start production, as former solar superstar Hanergy has failed to provide the necessary equipment. Hanergy is a minority backer, according to people close to the project.

An official from the Guiyang city government said local officials have been pushing the company to provide the promised equipment, and even traveled to Hanergy’s Beijing headquarters. But the efforts have been to no avail, despite the city’s investment of billions of yuan in the project.

Past efforts to contact Hanergy on similar negative developments have resulted in referrals to the company’s external public relations company, which declines to comment on individual cases and restates Hanergy’s belief that the company’s products “have market value.”

China is the world’s largest producer of solar panels and related equipment, including the thin-film products at the core of Hanergy’s business. It has built up manufacturing capacity over the last decade as a result of Beijing’s determination to turn the country into a manufacturing powerhouse for solar power-related products. But many companies are now struggling as a result of the rapid buildup, which has resulted in global oversupply.

Hanergy has set up similar industry parks around China, often with local governments providing much of the funding for facilities that are heavily outfitted with Hanergy equipment. The Guiyang project to make thin-film photovoltaic batteries and related products was first announced in 2017, with the local government partnering with Hanergy and investment firm Huafengyuan Investment (Beijing) Co. Ltd.

The project was to be built out in two stages with total investment of about 7.7 billion yuan ($1.1 billion), with Hanergy and Huafengyuan holding minority stakes of about 9% and 27%, respectively. In addition to its investments for equipment, the Guiyang city government has supplied the project with land and other infrastructure requirements like water, roads, telecoms and natural gas supplies.

Hanergy’s official website showed the project’s first products came off production lines in September 2018. In April this year, the products went into trial production, and official production began at the end of September, the site said.

But in fact, the production was only symbolic, according to knowledgeable sources close to the project who spoke with Caixin on condition of anonymity. Those sources said official production still hasn’t begun, and that products made after the Sept. 30 official production announcement have been shipped to another one of Hanergy’s industry parks, in the Shandong city of Zibo.

“If people from the government come to visit, the functional departments will put on work clothes and pretend that front-line workers are at work,” one of the sources said. “They just turn on the power, the devices won’t operate. The images on their computer screens are just screenshots, not the actual operating system.”