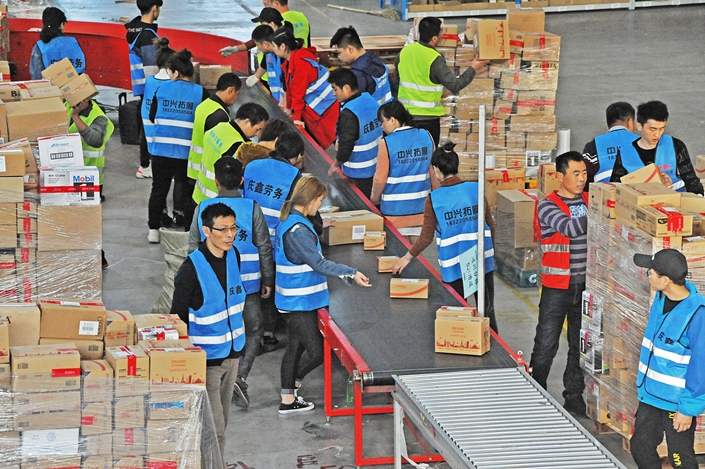 Workers sort packages of imported goods on Nov. 11 at JD.com's cross-border e-commerce warehouse in the northern city of Tianjin.

China has designated another 24 cities as cross-border e-commerce pilot zones, in an effort to boost exports.

These cities include Hebei province capital Shijiazhuang, Fuzhou in Fujian province, and Yantai in Shandong province, according to a statement (link in Chinese) released Tuesday by the State Council, the country’s cabinet.

Prior to the latest batch of cites, China had designated a total of 35 cities as venues for cross-border e-commerce since 2012. The new additions will extend the pilot program to most of China’s largest cities, including Shanghai, Guangzhou and Shenzhen.

Under the pilot program, companies typically enjoy benefits such as tax rebates and government support to set up e-commerce platforms and international logistic services, the State Council said in July.

The State Council’s move highlights the role of e-commerce in China’s international trade, said Zhang Zhouping, an industry analyst at the China E-Commerce Association. “The policy will also stimulate local companies to improve their technologies and provide better products for export,” he added.

Pilot cities are encouraged to coordinate their regulatory frameworks to promote the development of cross-border e-commerce. For example, Hangzhou, which was among the first batch of cities to be granted pilot zone status in 2012, set up two unified regulatory platforms in 2015 to handle cross-border ecommerce.

However China’s current taxation system poses impediments that can hinder the development of cross-border e-commerce.

One such area is customs clearance, according to Wang Xin, director at the Shenzhen Cross-Border E-Commerce Association. Wang said though China has put in place a special customs clearance channel for goods handled through e-commerce platforms, it isn’t widely used.

That’s mainly because there are significant bureaucratic hoops that sellers must jump through to use it, especially if they use logistics providers such as China’s post office, Wang said, adding that most e-commerce merchants use such providers.