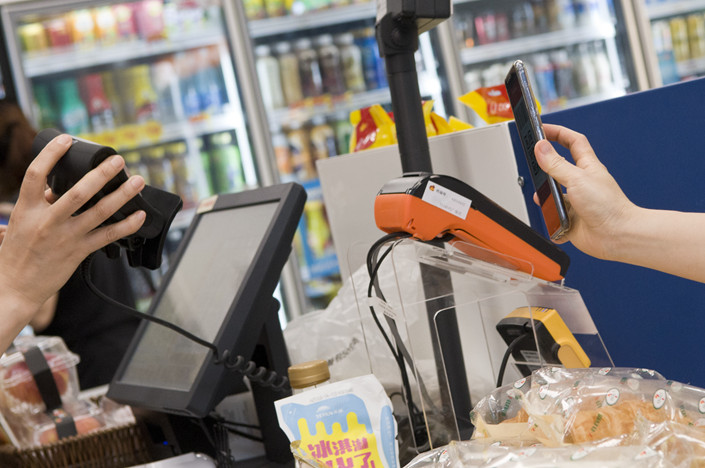 Caixin has learned the companies have also reached an agreement to work together on facial recognition-based payments.

Tencent Holdings Ltd. has given ground on China’s mobile payment battlefield by agreeing to integrate a key part of its user identification system with an industry latecomer, state-owned China UnionPay Co. Ltd.

The agreement challenges the duopoly of two of China’s tech titans, Tencent and Alibaba Group Holding Ltd., by giving UnionPay a larger foothold in a market with more than 1 billion users. It would also get China’s central bank a step closer to a goal that it sees as necessary to developing the country’s fintech sector.

Tencent, which runs the ubiquitous messaging app WeChat, has agreed to work with UnionPay to integrate the QR code systems in their mobile payment platforms, Caixin has learned. The change would, for example, allow a merchant to accept payment from one customer using WeChat Pay and another using UnionPay’s QuickPass by presenting both with the same scannable code. Currently, merchants in most places have to offer different codes for each payment service.

Tencent and UnionPay, which runs the country’s bank card monopoly, have begun testing out the integrated QR code system on Android devices in Fuzhou, East China’s Fujian province, sources familiar with the matter confirmed with Caixin.

Sources close to Tencent and UnionPay also told Caixin the companies have reached an agreement to work together on payments based on facial recognition technology.

UnionPay and Wechat Pay have not made any official announcement about these arrangements.

QuickPass is the third-largest mobile payment provider in China, but even with its roughly 240 million users, it’s still far behind the two dominant players.

Systems integration is key to the central bank’s plans to develop China’s fintech industry. In late August, the People’s Bank of China published a three-year plan for the industry stating that its goal of “one code for all” should be a reality by the end of 2021.

Still, the plan poses a challenge to Tencent and Alibaba’s dominance over mobile payments in China. “QuickPass could start to disrupt the duopoly of Alipay and WeChat Pay once its number of registered users reaches somewhere between 400 and 500 million,” a UnionPay employee told Caixin in a previous interview. “We expect it to happen sometime in 2020.”

For its part, Alipay is not involved in similar negotiations with UnionPay, sources said, due to Alipay concerns about integration.

That’s not surprising, considering that both Tencent and Alibaba have something to lose by working with UnionPay. “Without incentives for the two giants to integrate their QR codes (with competitors), it will only hurt their market share,” said one veteran industry regulator. “It will be hard to get them to go along with the policy, or at the very least they will drag their feet.”