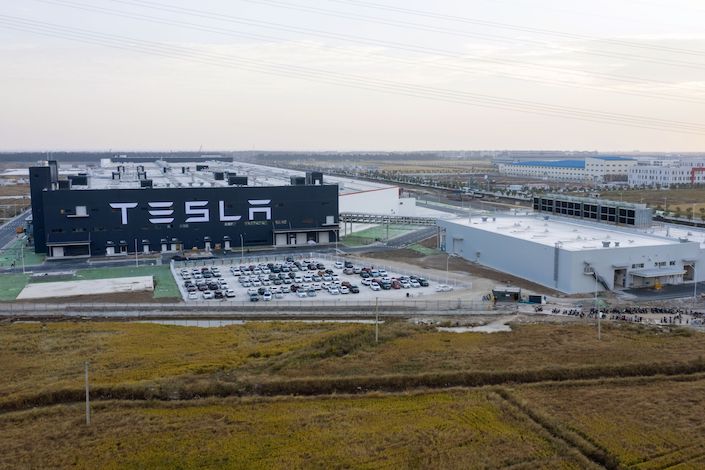 Tesla Inc. delivered its first China-made sedan to the public Tuesday as the U.S. electric-car maker officially kicked off production at its China plant in a key step to tap the world’s largest auto market.

The public rollout of the plant’s Model 3 electric cars came one year after Tesla broke ground on its multibillion-dollar Gigafactory near Shanghai — the first outside the United States. A week earlier, Tesla delivered 15 of the autos to employee customers.

Chief Executive Officer Elon Musk also announced plans to start China production of the Model Y crossover, an SUV unveiled in March 2019 and scheduled to hit the market this summer.

The production start at the Shanghai factory will expand Tesla’s production capacity to fuel a global push. According to the company, the China plant has produced 1,000 vehicles and reached a weekly capacity of 3,000.

Revenue from China already accounted for about 11% of Tesla’s total for the quarter ended September, up from 6% a year ago, according to Bloomberg.

Preferential policies and lower supply costs pushed up Tesla’s profit margin in China. Operating costs at the Shanghai factory are about 65% lower than at the U.S. manufacturing hub in Fremont, California, according to analysts at China International Capital Corp. Essence Securities said production in China reduced the cost of each Model 3 by 20% to 25%. The effect on costs of the Model Y will be even higher, the brokerage house said.

About 30% of the parts now used at the Shanghai facility are supplied locally, said Song Gang, the manufacturing director at the Shanghai plant, in late December. He said the company plans to increase that to 100% by the end of 2020.

The made-in-China Tesla also sent cheer to local electric vehicle suppliers and fueled a broad rally of stocks of Chinese parts makers. Shenzhen-traded shares of Zhejiang Sanhua Intelligent Controls Co., one of the country’s largest providers of heating, ventilation and air-conditioning components, have gained more than 70% since the middle of last year. Ningbo Huaxiang Electronic Co., a maker of rear-view mirrors, also jumped more than 60%, according to Bloomberg data.

Chinese electric-car makers are facing challenges to maintain their pace of growth as the government started rolling back subsidies in June. The country’s new-energy car sales have declined for five straight months since then, against the backdrop of a broader slowdown in the auto market.

While domestic brands dominate China’s low-price electric-car market, Tesla has a strong presence in the higher-end segment, which is less affected by the subsidy cuts, said an auto company manager.

A report by Tianfeng Securities showed that sales of electric cars with prices greater than 300,000 yuan felt only slight impacts from subsidy policy changes. The market share of these pricier vehicles of total new-energy vehicle sales expanded from 6.2% in 2017 to 25.4% in October 2019.

But Tesla will face greater competition as more players join the market, especially luxury brands such as BMW and Daimler. Daimler’s Mercedes-Benz in October introduced its all-electric EQC to China, while BMW plans to start producing iX3 crossover and electric-powered Mini models in China. Volkswagen AG’s Audi said in November that it plans to introduce nine new-energy vehicles in China during the next two years.