Video App Douyin Shatters Some Stereotypes About Its Enormous User Base 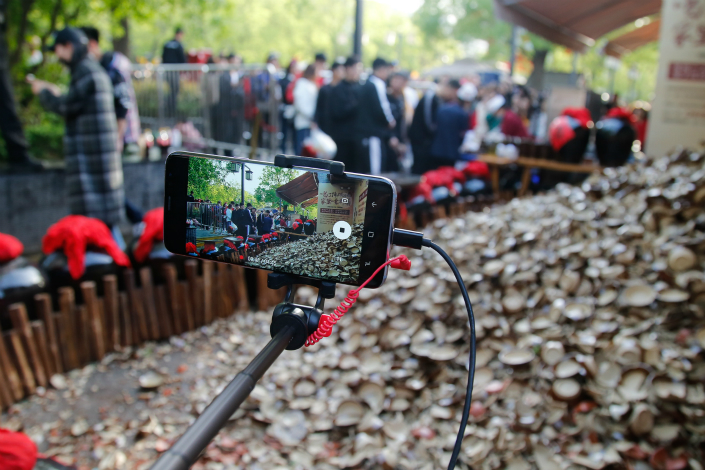 A video is made of Chinese tourists smashing their bowls after finishing their drinks at the Yongxingfang Food Court in Xi’an, Shaanxi province, on April 6.

Short video app Douyin has passed 400 million daily active users, its operator announced Sunday in a visual report that includes previously undisclosed insights on the app’s domestic users and the types of videos they view and create.

ByteDance Ltd., which also runs Douyin’s embattled international analogue TikTok, said the number of domestic users was up 60% from January 2019.

Among the key insights: Northeast China’s rust belt may be economically unproductive, but it sure makes plenty of content. The trio of Liaoning, Jilin and Heilongjiang provinces made the top five Chinese regions by number of users who post videos. Beijing took the top spot, with Shanghai at No. 3.

Millennial stereotypes were punctured by the finding that it was those born in the 1970s — the final years of the Chairman Mao era — who were most likely to shoot and share videos of their food.

People born in the 1960s were more likely to share dance videos, presumably of the kind of square dancing that people of that age often partake in around the country. They most commonly watched wedding videos, of which 7 million were broadcast on the service last year.

Those under 20 years old preferred sharing anime and watching clips of cute animals, which are as much of a hit as they are on any social video site. According to the report, the Siberian Husky took the mantle of “most popular dog” for 2019, while the most popular cat was a kind of tabby called a Dragon Li.

The company even named its “most popular duck.” That coveted title went to the call duck, a domestic specimen prized for its quack. The expensive pets made waves last year when one of their kind was debuted on social media by high-profile second-generation billionaire Wang Sicong.

Mature call ducks were selling on Taobao for some 15,000 yuan ($2,160) in August, the state-run China Daily reported. Wang was later banned from making extravagant purchases and had his assets frozen in separate court actions.

The report talks up Douyin’s credentials as a cultural repository, saying 93% of China’s 1,372 officially listed national-level intangible cultural heritage items — including things like Peking Opera, Dragon Boat Racing and various kinds of martial arts — are represented by accounts on the service.

One category of content absent from the report was that deemed politically sensitive on the Chinese mainland, which ByteDance removes in accordance with China’s strict rules.

Douyin’s international version, TikTok, which does not operate on the Chinese mainland, has been installed around 1.5 billion times since it launched in 2017. But its enormous growth has hit a roadblock in the U.S., its biggest market, where it is facing scrutiny due to national security fears.

Its Chinese ownership has become a lightning rod for criticism as tensions rise between the U.S. and China over trade and technology, with concerns centering on its handling of user data and its content policies.