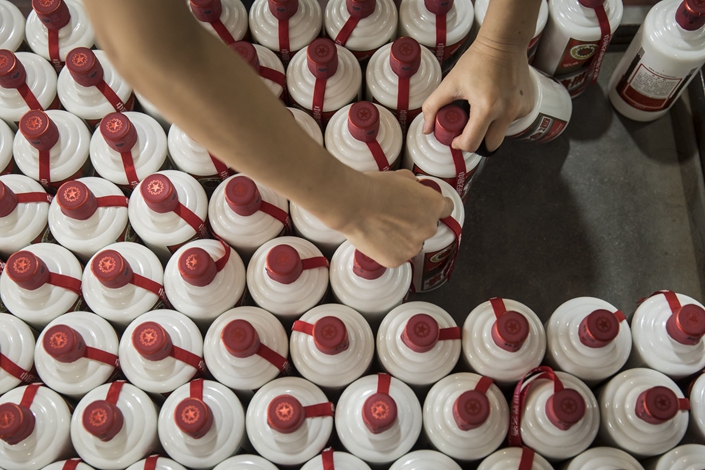 Moutai, the “national liquor” of China, is often involved with corruption. Photo: Bloomberg

While one episode of a Chinese televised documentary unveils cash-stuffed secret vaults owned by a corrupted Chinese banker, another episode shows a government official pouring valuable antique Moutai liquor down the drain to destroy evidence of bribery.

A five-episode documentary that started Sunday on state broadcaster China Central Television tells how Moutai, known as “the national liquor” and often served at Chinese state banquets and presented as diplomatic gifts, is coveted and hoarded by corrupted officials.

Wang Xiaoguang, former vice governor of Guizhou province, where the most revered Chinese liquor is made, is among the fallen officials who own the most Moutai liquor. He was sentenced in April to 20 years in prison for accepting bribes worth more than 50 million yuan ($7.25 million) and illegally gaining 162.69 million yuan by participating in investment activities using confidential information he acquired when serving the government.

Investigators found more than 4,000 bottles of Moutai liquor stocked in a room at Wang’s home, the documentary shows. But that’s not all of his inventory. Worried about a probe, he removed the labels of some of the most expensive batches or poured them into other containers, according to the broadcast.

It is believed that older Moutai tastes better, while some special limited editions could be worth as much as 300,000 yuan a bottle, according to the auction house Christies.

Later Wang still felt insecure, so he poured those liquors down the drain, investigators said in the documentary.

Wang was close to Yuan Renguo, former chairman of state-owned Moutai maker Kweichow Moutai Co. Ltd. In 2009, Yuan handed out lucrative Moutai distribution licenses to Wang and his relatives in exchange for favors from the government. Such licenses come with a relatively high upfront cost of between 10 million yuan and 20 million yuan when obtained legally, company insiders say. But the returns are high, as Moutai typically retails for twice its official factory price. Wang and his family made more than 40 million yuan of profits in seven years through these distribution licenses.

Soon after Wang came under graft investigation, Yuan was arrested in 2018 on suspicion of taking bribes. Other former executives of the distiller have also been arrested for similar reasons, and the company’s new management is developing a new sales model to fix the corruption loophole in the existing distribution network.

Moutai-related corruption is not only rampant in Moutai’s hometown but all round the country.

Bai Xiangqun, former vice chairman of the Inner Mongolia autonomous region who was sentenced to 16 years in prison for bribery, corruption and insider trading in October, embezzled 900,000 yuan of public money to buy 81 bottles of special edition Moutai, according to the documentary. He said he wanted to stock enough liquor for his retirement.

The Guizhou provincial government has carried out a special rectification campaign to crack down on Moutai-related corruption. As of the end of September, 282 individuals were under investigation, among whom 47 were turned in to judicial authorities. Licenses of more than 500 Moutai specialty stores that obtained their distribution rights illegally have been revoked, the documentary reports.