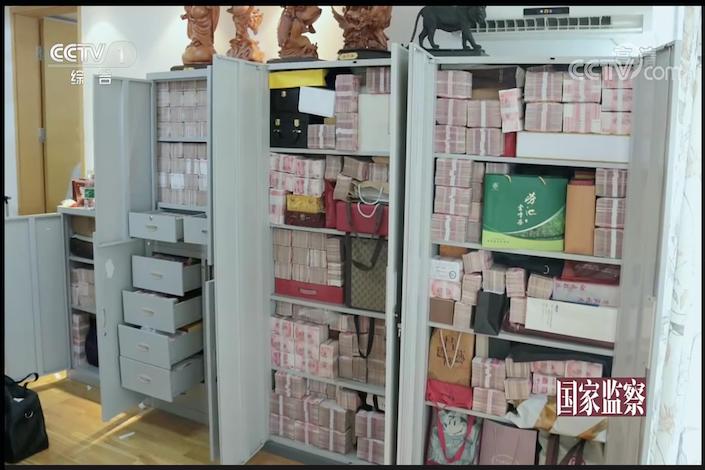 Jaw-dropping details of the corruption case involving the former head of a powerful Chinese state lender were disclosed in a televised documentary, showing a room filled with more than 200 million yuan ($29 million) of cash.

A five-episode documentary that started Sunday on state broadcaster China Central Television tells the tales of Lai Xiaomin, the former head of state bad-asset manager China Huarong Asset Management Co. Ltd. He was formally arrested in November 2018 on charges of bribery, embezzlement and cronyism. Lai himself appears in part two of the documentary, which aired Monday as he awaits trial.

“We have dealt with a number of cases in the financial sector, but none was as shocking as Lai’s case in the amount, degree of damage and plots and means of crimes,” says Chen Qingpu, deputy director of the Central Commission for Discipline Inspection, the Communist Party’s anti-corruption watchdog, in the documentary.

The details revealed by the authorities reconfirmed some of Caixin’s previous exclusive reports on Lai’s case.

Images show multiple cabinet safes filled with cash and other valuable objects in an apartment owned by Lai. To avoid investigation, Lai always asked for cash payment of bribes and then personally put the money into these safes, according to the authorities.

Lai and people close to him called this apartment “the supermarket,” Lai explains in his appearance. He says he didn’t spend a penny from it and all the funds and objects were confiscated by the authorities.

“So I say, What’s the use of having so much money?” Lai says. “I dared not spend any of it and was on tenterhooks all the time.”

The cash stashed in the “supermarket” was only part of Lai’s illegal gains. In addition to cash, he also received large amounts of property, cars, luxury watches, gold and artwork, authorities said.

Lai says he helped many executives in the financial sector to develop assets worth of tens of billions of yuan. For these managers, paying such bribes was only a drop in the bucket, Lai says. He thought it was normal for them repay his favors, he says.

The exact total of Lai’s ill-gotten gains hasn’t been confirmed by authorities but will undoubtedly be a shocking figure, the documentary says. The indictment specifies only a “huge amount.”

Lai led an aggressive expansion of Huarong, opening dozens of subsidiaries and quickly expanding one of the nation’s four largest distressed-asset managers into a financial conglomerate with licenses covering banking, securities, trusts, investments, futures trading and financial services. Under his leadership, Huarong even violated certain state policies and participated in some projects that were prohibited for state-owned financial institutions.

Lai also directed Huarong to provide large sums of money to private companies in which he had an interest. Some of the companies were run by Lai’s friends, and he ordered that risks associated with the investments be ignored or glossed over, says Bai Tianhui, former general manager of a Huarong subsidiary, who was also arrested for suspected bribery.

“He (Lai) once said, if there is any risk, Huarong is a distressed-asset specialist,” Bai says in the documentary. “I can have it solved. But his solution to the problematic assets was not through techniques and operations, but through using more money to fill a bigger hole. He said, if there’s more risk, we can refinance and extend the risk.”

Prosecutors have submitted an indictment to Tianjin No. 2 Intermediate People’s Court. In the indictment, Lai was charged with illegally accepting bribes through his positions as ex-party chief and head of Huarong Asset Management. He was also charged with living together with a person “as husband and wife” while still legally married to someone else. A trial date hasn’t been set.