By Zeng Lingke and Flynn Murphy 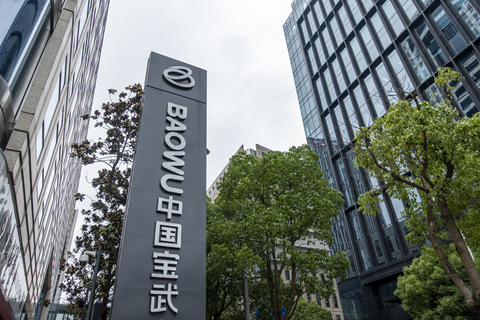 Iron ore at the port of Nantong, East China's Jiangsu province on Sept. 11.

When the captains of China’s iron and steel industry met for their yearly industry conference in Beijing over the weekend, the cost of doing business appears to have been on everyone’s mind.

Company representatives did not respond to questions about the site of the proposed mine.

Chen said the company would team up with other steel producers and jointly establish a fund to develop the mine, which would supply iron ore with an estimated cost, insurance and freight (CIF) price of roughly $40 per ton — well below the average price of imported ore last year.

He also said the company would team up with other large producers to build a procurement platform to bring down costs.

The sharp rise in iron ore prices over 2019 had been “painful” for the industry, he said, complaining that international iron ore producers made bumper profits while the average price of imported iron ore in China surged to $90 per ton.

Baowu is the second-largest steelmaker in the world, with the capacity to produce 90 million tons of the cheap and useful alloy each year. It plans to take over Chongqing Iron and Steel Co. Ltd. by midyear through a share transfer, which would increase its capacity to 96 million tons.

From China Iron and Steel Industry Association President Gao Xiangming, there was talk of strengthening high-level negotiations with overseas iron ore suppliers and expanding supply channels, as well as increasing the use of scrap steel, a process that recycles existing steel.

Viewed from China, the world’s biggest iron ore importer, the global market is an oligopoly ruled by three giants — Rio Tinto, BHP and Vale SA — which together control about 70% of global exports.

Overseas iron ore mining forays by Chinese companies often fail due to lack of experience and local knowledge, as well as a failure to conduct sound risk analysis and plan accordingly, analysts say. They also tend to focus on lower quality mines because higher quality ones are controlled by global leaders.

China has the world’s fourth-largest iron ore reserves, but its stock is mostly low grade and needs costly processing to extract a useful amount of metallic iron. It is further hindered by a reliance on foreign mining equipment and a dearth of advanced techniques like remote and unmanned mining.

This alongside the growing country’s huge appetite for steel, used in everything from shipbuilding to construction to appliance-making, has helped make China fundamentally reliant on iron ore imports. But the industry has long complained of the contradiction between this position and its relatively weak power over the commodity’s price.

Baosteel Group, which merged with Wuhan Iron and Steel Group in 2016 to form Baowu, had long sought to increase the bargaining power of China’s steel companies in setting iron ore prices, said Cao Nanxin, an analyst with Albright Stonebridge Group LLC. “Baowu wants to have more say in the pricing, as other producers and the Chinese government have been striving to do for years,” Cao said.

The steel sector enjoyed strong profits between 2016 and 2018, mainly as a result of a government drive to cut excess capacity as well as a period of relatively stable ore prices. But influence over pricing is back on the agenda after last year’s dramatic rises saw many Chinese steel producers return to slim profits or losses. They stemmed from a deadly dam collapse in Brazil in late January that forced Vale to suspend production at some of its mines, while in Australia, miners slashed output following hurricane and fire damage in March.

Cao says there remains a lack of coordination among Chinese producers, and efforts to address this — including industrywide consolidation — could take years to bear fruit. Overseas iron ore producers will probably be hoping it stays that way.