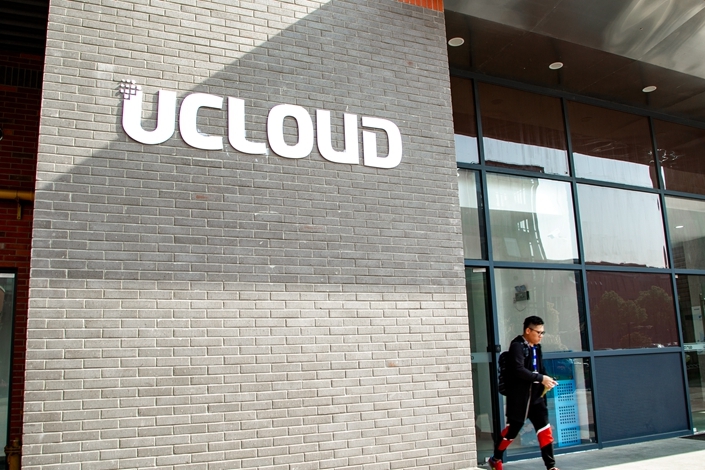 UCloud’s headquarters in Shanghai on April 8.

The first company to take advantage of China’s new rules allowing dual-class share listings gave back some of its debut gains on Tuesday.

Shanghai-based UCloud raised 1.9 billion yuan ($275 million) in its IPO with shares priced at 33.23 yuan on the STAR Market, also known as the Shanghai Stock Exchange Science and Technology Innovation Board. UCloud opened trading on Monday at 72 yuan per share, where it hovered before closing Tuesday at 68 yuan per share.

Trading on the STAR Market began in July, and has become a testing ground for reforms that aim to make domestic stock markets more attractive places to list for innovative companies in emerging industries. The board has adopted a new IPO mechanism based on a registration system rather than one that requires detailed regulatory approval for every listing. It is the only board on the mainland to allow dual-class listings.

Beijing’s decision to allow domestic listings of companies with dual-class share structures is a boon for all startups in China, UCloud founder and CEO Ji Xinhua said in an interview with Caixin. UCloud’s successful IPO also represents a major step forward in China’s IPO reform.

Many technology companies, including Facebook Inc. and Chinese e-commerce giants Alibaba Group Holdings Ltd. and JD.com Inc., use shareholding structures with weighted voting rights, which enable their founders to retain control of the companies after they go public. Allowing IPOs with dual-class shares may give the Shanghai Stock Exchange a better shot at competing against its rivals in Hong Kong and New York.

The Chinese government has long encouraged Chinese technology companies to list at home, but the ban on dual-class share structures has pushed many of the best-known firms, including Alibaba and Tencent Holding Ltd., to list abroad.

Founded in 2012, UCloud sells cloud computing services to enterprise clients, most of which are internet startups. UCloud posted revenues of 1 billion yuan in the first three quarters of 2019, up 28% year-on-year, with profits dropping nearly 85% to 10.76 million yuan for the same period. As a comparison, Alibaba’s cloud services business racked up sales of 9.3 billion yuan in the third quarter last year.

China’s cloud market is largely dominated by major players, with the top five companies controlling about three-quarters of the market in the first half of 2019, according to industry data tracker IDC.

Ji said UCloud will ramp up investment in research and seek to expand its client base, as well as spend about 1 billion of its IPO funding to build a data center in China’s Inner Mongolia autonomous region.

Ji said he is confident in UCloud’s continued sales growth, because demand for cloud services in China is still expanding, particularly among companies in traditional sectors and government agencies.

Timmy Shen contributed to the report.