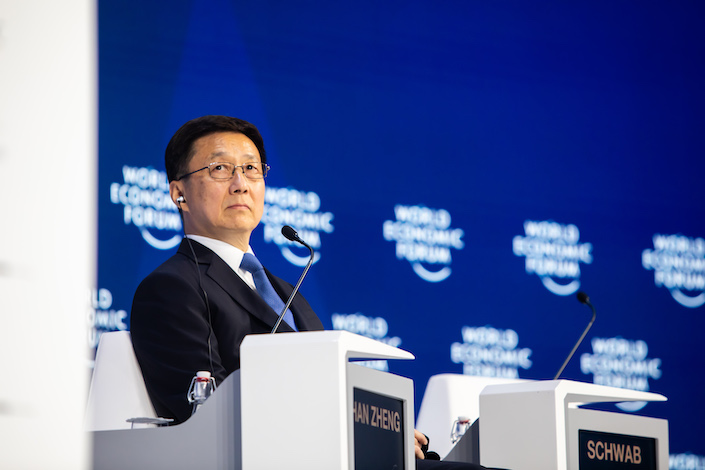 Han made the comment in response to growing concern in Europe that the U.S.-China accord could harm European companies.

“The phase one trade agreement between China and the U.S. is good for China, good for the U.S. and good for the world,” Han said, speaking before an audience at the World Economic Forum in Davos, Switzerland. “China will purchase more U.S. products on the basis of WTO rules, market terms and commercial principles, which means the purchases will not affect the interests of other trade partners.”

“China has an enormous market,” he said. “We continue to welcome companies from all countries to compete on an equal footing in the big Chinese market.”

The vice premier’s comment came hours after U.S. President Donald Trump in a speech at the event abruptly raised the expected amount of Chinese purchases from $200 billion as in the agreement to $300 billion, without elaboration.

“China will spend an additional $200 billion over two years on American services, agriculture, and energy, and manufactured goods,” Trump said. "So we'll be taking in an excess of $200 billion; could be closer to $300 billion when it finishes.”

Since the U.S. and China signed the partial deal last Wednesday in Washington, the European Union has expressed concern that China’s massive mandatory purchases of American products could distort the market, reducing the country’s imports from its European trading partners.

Nicolas Chapuis, the European Union ambassador to China, told reporters Friday that the EU will challenge the China-U.S. trade agreement at the WTO if it creates market "distortions" that harm EU companies.

"In our opinion, quantitative targets are not WTO-compatible if they lead to trade distortions," Chapuis said. "If it were to be the case, we will go to the WTO to settle this matter."

He was given "formal assurances that in absolutely no way would European businesses be affected by the U.S.-China deal" during a meeting at the Chinese foreign ministry, according to the AFP.

The WTO's rule of most-favored-nation treatment specifies that countries shall not discriminate between trading partners.