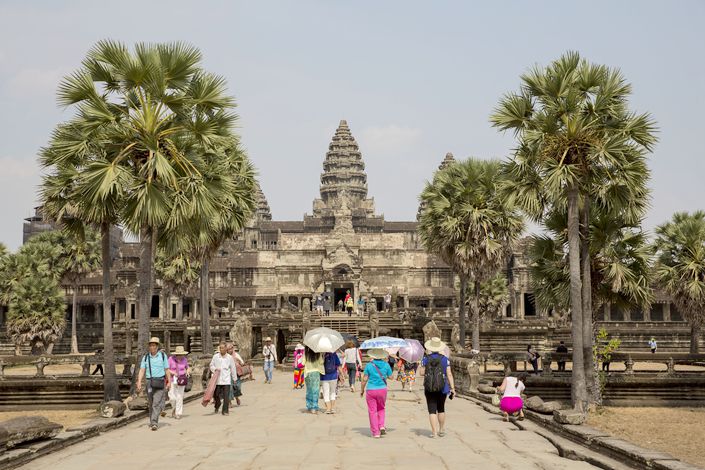 Economies across Asia have become much more dependent on Chinese tourism. Photo: VCG

Analysts are revising down their expectations for growth this year as the impact of the new coronavirus outbreak in China sends tremors through tourism, trade and other economic activity across Asia and the world.

The ASEAN+3 Macroeconomic Research Office (AMRO), a Singapore-based research firm that advises members of the Asian regional bloc, UBS AG and S&P Global Ratings are among those estimating economic growth will be hurt as the Covid-19 coronavirus spreads.

Singapore’s Prime Minister Lee Hsien Loong said on Friday the island’s economy would “take a hit” as a result of the virus and warned a recession was possible. In Japan, one of the countries worst-affected by the disease in terms of the number of confirmed cases, Economy Minister Yasutoshi Nishimura said on Friday that the outbreak, as well as unusually warm weather that hurt sales of winter clothing, were “fresh factors weighing on the economy.”

Travel and tourism have been particularly hard hit both domestically in China and across Asia, especially in Thailand. Many countries in the region, including Japan, Malaysia and Singapore, have reduced or suspended air travel to and from mainland China, where the number of people infected with Covid-19 had risen to 63,932 as of 10 a.m. on Friday Beijing time. Delays in re-opening factories in China after the Lunar New Year holiday are hurting global supply chains, especially for the technology, electronics and auto industries, with Singapore, South Korea and Japan the most severely affected.

In a 17-page report analyzing the potential impact of the coronavirus in Asia, AMRO said a 0.5 percentage point decline in China’s economic growth this year would lead to a 0.2 percentage point reduction in the expansion of gross domestic product (GDP) in the 10 countries of the Association of Southeast Asian Nations plus China, South Korea and Japan, a grouping known as ASEAN+3. The report did not give specific estimates for GDP growth.

The report said the outbreak will have spillover effects on ASEAN+3 countries in four main areas –– a drop in outbound travel and tourism from China, a decline in regional travel and tourism as a result of fear of contracting the disease, a decline in Chinese imports due to lower economic activity and disruption of global supply chains, and the spread of the disease to other countries in the region.

Many analysts have taken the experience of the 2002-2003 outbreak of severe acute respiratory syndrome (SARS) as a guide in trying to assess the impact on China and the global economy. But the report points out that massive growth in tourism, both globally and outbound from the mainland, alongside a shift in global supply chains accompanied by a surge in international trade, means that parallels with SARS are inadequate.

Economies across Asia have become much more dependent on Chinese tourism. Mainland residents accounted for around 80% of all visitors to Hong Kong, more than 30% to Cambodia, South Korea and Vietnam, and about 30% to Thailand and Japan in 2018, the report said. By comparison, in 2002 before the SARS outbreak, Chinese travelers only accounted for 41% of visitors to Hong Kong and fewer than 10% to the rest of the region.

Tourism is also making a much larger contribution to almost all economies across the region than it was in the early 2000s, according to the report, which means they will take a much harder hit from the Covid-19 outbreak. The World Travel and Tourism Council has estimated that tourism contributed 10% to Thailand’s GDP and 14% to Cambodia’s in 2018.

China is also a much more important part of global supply chains than it was during the SARS outbreak, which means intra-regional trade in goods will also be hit by demand and production disruptions, the report said. Goods trade between ASEAN countries and China amounted to almost 20% of the group’s GDP in 2018, up from around 8% in 2002, with goods exports to China accounting for a quarter of GDP in Vietnam and more than 10% in Malaysia, South Korea, and Laos.

AMRO forecast that China’s manufacturing sector will recover more quickly and strongly than services as it’s easier for manufacturing companies to match output to demand. The services sector, however, will have limited capacity to make up for lost business in the short term, it said.

Economists at UBS AG estimate Hong Kong, Thailand and Singapore will likely be worst hit by Covid-19 fallout in the first quarter because of their high exposure to China in terms of trade and tourism. They expect outbound travel from China will drop 60% year-on-year in the first quarter and 30% for the full year as restrictions are imposed on visitors from the mainland.

They have lowered their forecasts for Hong Kong’s 2020 GDP growth and now expect a contraction of 1.8% compared with a previously expected drop of 0.5%. They also cut their projection for Thailand to an expansion of 1.8%, down from an original expectation of 2.6%, and reduced Singapore’s growth forecast to 0.3% from 1%.

Ratings firm S&P Global said in a Feb. 12 report that the outbreak was disrupting the global technology sector, and especially hardware, electronic manufacturing services providers, and semiconductor companies. Its economists and researchers expect the fallout from the Covid-19 virus to take 70 basis points off China’s GDP growth this year and 30 basis points off global expansion, based on the expectation that the virus will be contained globally by the end of March, allowing travel and other restrictions to be unwound by the middle of the second quarter.