By Zhao Ning and Han Wei 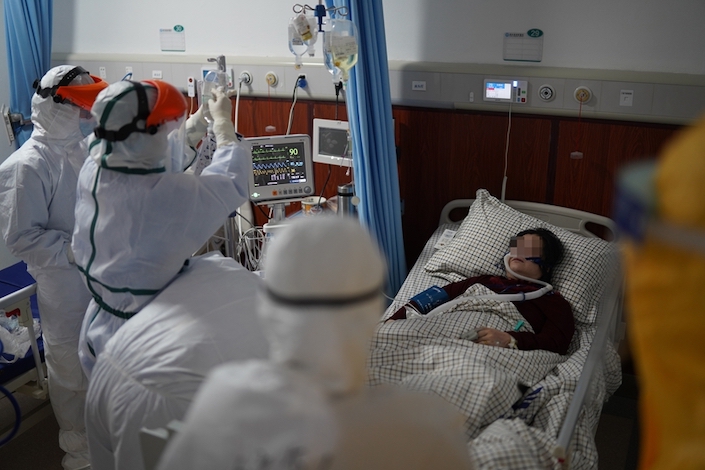 As of Feb. 11, the government acknowledged more than 1,700 medical workers nationwide as confirmed with the disease. Photo: Caixin

Reports of a series of new infection cases in Beijing sparked fears over the capital’s exposure to mounting risks of the deadly coronavirus, especially as millions of people are heading back to work after an extended holiday.

New confirmed cases have led to large-scale quarantines in at least two hospitals in downtown Beijing, with many potential contacts to be traced, according to a city government news briefing Thursday.

Beijing reported a total of 395 confirmed Covid-19 cases by the end of Wednesday. Nationwide, the disease has sickened nearly 75,000 people and killed 2,122. More than 80% of the patients are from central China’s Wuhan and the surrounding Hubei province.

The daily count of total new infection cases has declined for several days in China, fueling hopes that the epidemic is nearing its peak. But clusters of infections recently reported at hospitals in Beijing sparked concerns over the vulnerability of medical institutions in the city.

According to the Thursday briefing, a total of 22 people at the Peking University People’s Hospital, including patients and medical workers, have been placed under centralized quarantine for medical observation after an elderly patient in the hospital was confirmed for the Covid-19 infection on Feb. 18. More than 200 others are also being monitored for potential exposure to the virus.

The patient, surnamed Tian, had been hospitalized by the People’s Hospital for six months for kidney disease. She was diagnosed after her daughter and son-in-law were both confirmed with Covid-19 by the People’s Hospital on Feb. 17 after showing symptoms. The couple returned from Xinjiang on Jan. 16 and paid frequent visits to Tian until Feb. 9 when the hospital closed to visitors for epidemic control. The three have been transferred to a designated hospital for treatment, according to a hospital official at the briefing.

The hospital said Tian and her families were likely infected by another patient who passed away before being diagnosed with Covid-19.

Tian took regular renal dialysis treatment during her stay at the hospital, allowing her to come into contact with many patients and medical workers. The People’s Hospital has shortlisted more than 250 people who may have had close contact with Tian, including nearly 150 patients and 100 hospital staff. So far, laboratory tests haven’t detected positive results among these contacts, according to the briefing.

The incident reminded many people of Beijing’s painful battle against the 2003 SARS outbreak. The capital, with a population of 21.5 million people, was one of the cities hit hardest by the epidemic, with more than 100 deaths. The People’s Hospital was among several institutions in Beijing that were quarantined due to widespread SARS infections.

A doctor at the hospital told Caixin that the People’s Hospital has closed the ward where Tian was housed, and transferred patients to another campus. Medical workers who had contact with Tian and her family are under quarantine in a hotel.

The Thursday briefing provided details about another infection cluster at Fuxing Hospital, also in downtown Beijing. As of Thursday night, a total of 36 novel coronavirus infection cases were confirmed at the hospital, including eight medical workers, nine cleaning staff and 19 patients and families.

Another prestigious hospital, Beijing Friendship Hospital, also reported a suspected case earlier this week, but was later cleared. Several other major hospitals in the city have closed inpatient departments to visitors as part of epidemic control efforts.

Hospitals and medical workers faced the highest risk of infection. As of Feb. 11, the government acknowledged more than 1,700 medical workers nationwide as confirmed with the disease, almost 90% of them in Hubei, according to the National Health Commission (NHC). But a study by the Chinese Center for Disease Control and Prevention (CDC) estimated that the actual number of medical worker infections could be twice as many as the official figure.

The Thursday briefing also shed light on how doctors can contract the virus. Wang Guangfa, a respiratory and intensive care medicine doctor, visited Wuhan on Jan. 8 as a member of the NHC expert team to investigate the outbreak. Wang returned to Beijing on Jan. 16 and was diagnosed five days later.

Another Beijing public hospital doctor, surnamed Lu, was infected after a visit to Wuhan on Jan. 10. A colleague, surnamed Yang, was confirmed with the infection after sitting beside Lu at a work meeting, according to the briefing.